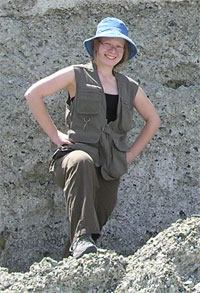 Siobhan A.(Sasha) Wilson was born in Oshawa, Ontario, in 1980, Sasha graduated from McMaster University in 2003 with an Honours Bachelor of Science in physics with a minor in Earth science. She began her studies at the University of British Columbia as a master’s student in the fall of 2003 working under the supervision of Gregory M. Dipple and Mati Raudsepp. She completed her MSc in the fall of 2005 and began work toward her PhD immediately thereafter.

Sasha’s MSc and PhD thesis research concern the disposal of atmospheric carbon dioxide in mine tailings. Mineral carbonation is a safe and permanent method of carbon disposal in which silicate minerals react with atmospheric or industrial CO2 to produce geologically stable, environmentally benign carbonate minerals. Naturally occurring mineral carbonation phenomena have recently been observed at the surface of chrysotile mine tailings at Clinton Creek, Yukon; Cassiar, British Columbia; and the Thetford Mines, Québec; as well as at the Mount Keith nickel mine, Western Australia, and the Diavik diamond mine, NWT. The primary focus of her master’s research was to characterize and quantify natural mineral carbonation at the abandoned Clinton Creek and Cassiar chrysotile mines. Her PhD research involves documentation and acceleration of mineral carbonation phenomena in the active mine sites at Mouth Keith and Diavik. Sasha describes her research as follows:

The principal techniques employed in my study have been mapping and sampling, X-ray powder diffraction (XRPD), scanning electron microscopy (SEM), Raman spectroscopy, radiogenic carbon dating, stable isotope analysis, and bulk chemical analysis. As part of my master’s research, I presented the first detailed field characterization of natural mineral sequestration in ultramafic mine tailings at Clinton Creek, YT, and Cassiar, BC. I detailed the modes in which the hydrated magnesium carbonate minerals hydromagnesite, dypingite, nesquehonite, and lansfordite occur in tailings environments and defined the mechanisms by which they form.

I have successfully applied the Rietveld method for quantitative phase analysis to X-ray powder diffraction profiles for natural and synthetic serpentinite mine residues. This is the first instance in which the Rietveld method has been used successfully to compensate for structural disorder in the kaolinite-serpentine group minerals. I have confirmed crystallographic binding of carbon and have quantified CO2 uptake in tailings samples. I have developed a new procedure allowing unambiguous fingerprinting of the source of carbon tapped in the formation of carbonate minerals. Using radiogenic and stable isotope techniques, it is possible to determine whether the carbon in carbonate efflorescences has been derived from the atmosphere. Using isotope data and Rietveld results, I have quantified the amount of atmospheric CO2 bound in carbonate minerals.

Studying mineral carbonation in active mines at Mount Keith, Western Australia, and Diavik, NWT will contribute towards the design of new mining processes that will accelerate CO2 uptake to create the world’s first generation of zero-emissions mining operations. I have observed and quantified the precipitation of hydromagnesite in tailings at Mount Keith and have documented the precipitation of nesquehonite in the kimberlite tailings at Diavik. Further field work and bench-top precipitation experiments will determine whether mineral carbonation is a valid means of CO2-sequestration under the desert conditions at Mount Keith and in the tundra at Diavik.