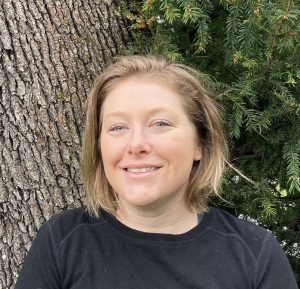 Rebecca Morris completed her BSc Hons (2010) in Geology at the University of Calgary (Canada). During her undergrad she was advised under Dr. Cathy Ryan, studying stable isotope variations and chloride mass flux of groundwater-surface water interactions within the Calgary area.

Post undergrad, she worked as a hydrogeologist before returning to school to study her true passion of igneous petrology and arc geochemistry. She completed her MSc at Western Washington University (USA), advised under Dr. Susan DeBari, on the petrogenetic processes that generated mid- to upper- crustal units of the southern Alisitos arc in Baja California, Mexico.

Rebecca is now pursuing her PhD under Dr. Dante Canil at the University of Victoria (Canada). For her research, she integrates her love of field geology, igneous petrology, and geochemistry by studying magma-wallrock interactions within arc systems. Specifically, she focuses on magma-carbonate interactions, as these have recently been shown to produce significantly more CO2 than previously believed.

To investigate this, she studies the well-exposed Jurassic Bonanza arc (Vancouver Island, Canada), which was built on and intruded older carbonate platforms. She is currently using various tools to trace the assimilation of carbonate into the arc magmas, such as 18O values of mineral and whole-rock chemistry along pluton margins in contact with wallrock.

Her work has led to a discovery of unique orbicular-rich dikes, that show physical and chemical evidence of magma-carbonate interactions, and may represent a possible unexplored transport mechanism of CO2 within arc systems.