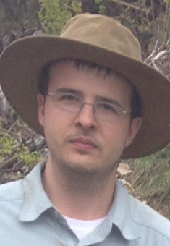 Philippe Belley started his geology career as a serious mineral collector in high school. In 2014, he received a BSc with a specialization in geology from the University of Ottawa. As part of his undergraduate studies, he conducted research on boron isotope behavior during metamorphism and on metasomatic Mg-Al-spinel. His work was published in Canadian Mineralogist and in Rocks & Minerals.

In 2014, Phil joined Lee Groat’s lab (University of British Columbia) as an MSc student working on gem spinel occurrences in Nunavut. He recently transferred to the PhD program and broadened the scope of his research to assess gem potential in Canada on a regional scale. The first element of his research is to produce genetic deposit models for scapolite-hosted sapphire and spinel occurrences on Baffin Island, Nunavut. This will be achieved by detailed paragenetic determinations and the use of stable isotope geochemistry (e.g. boron, oxygen). He will use these new models, existing gem deposit models, data on known Canadian gem deposits, and additional field work to assess the distribution of colored-gem potential in the high-grade marble-rich Central Metasedimentary Belt (Grenville Province, Ontario and Quebec) and in the Lake Harbour Group (Baffin Island).