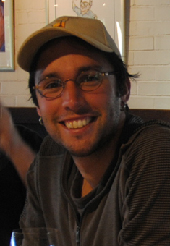 Peter Crockford received his BSc (2008) and MSc (2011) from the University of Victoria. His undergraduate work focused on balancing the mercury budget of the Earth, and he continued on through his master’s to look at the response of carbonate-hosted saline aquifers to CO2 injection.

After his work at the University of Victoria, Peter spent time doing mineral exploration in the Arctic and hydrogeological consulting in Alberta. He then returned to academia in 2013 to pursue his PhD on Cryogenian glaciations, largely motivated by fieldwork in Namibia with Dr. Paul Hoffman.

Peter is currently at McGill University under the supervision of Dr. Boswell Wing and Dr. Galen Halverson. His PhD is on the isotope geochemistry of Proterozoic sulfate minerals and what these isotopic archives reveal about Earth’s ancient biogeochemical cycles. Specifically, his work exploits triple oxygen and multiple sulfur isotopes as proxies to reconstruct the composition of the Proterozoic atmosphere.