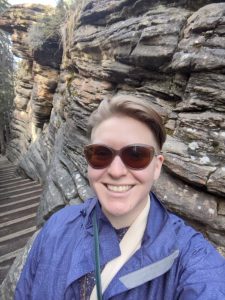 Miranda Holt completed her BSc (Honours) in Geology at the University of Alberta in 2020, where she completed research projects on the evolution of lherzolite during partial melting and Fe-Ni sulfides within the Tagish Lake meteorite, the later of which continues as part of her MSc thesis.

Under the supervision of Dr. Chris Herd at the University of Alberta, her MSc thesis will focus on determining the nature of sulfur-bearing components within the carbonaceous chondrites Tagish Lake, Aguas Zarcas, and Tarda. This study will examine the textures and chemical and S-isotopic compositions of these components, including minerals and organic matter, to determine their abundances, the temperatures and methods by which they were formed, and whether they were formed by processes occurring in the solar nebula or on the meteorite parent body. Whether certain phases may have formed systematically by the alteration of another, earlier formed component will also be determined. These conclusions may apply to other meteorites of this same type.

This study will also determine what changes have occurred to these phases since their fall, collection, storage, and various forms of invasive processing by examining fresh, pristine samples, some of which have been kept under cold conditions since their collection, and comparing the findings with those for samples that have been held at room-temperature and processed during previous studies. This will allow recommendations to be made about the proper methods of storage to limit alteration and contamination, as well as the proper order of analysis to ensure that the greatest amount of information can be extracted from the smallest possible amount of material. This is highly valuable as many samples of extra-terrestrial material are quite small.