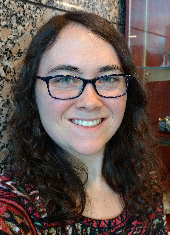 Jillian Kendrick completed her BSc degree majoring in Earth Sciences at Dalhousie University in 2015, where she studied coronitic metagabbro from the Grenville Province and pseudomorphs after olivine for her honours thesis. Further pursuing her interest in metamorphic petrology and microanalysis, she began her MSc degree the following fall at Memorial University of Newfoundland working with Dr. Aphrodite Indares.

The theme of Jillian’s work at Memorial is combining trace element analysis with cathodoluminescence (CL) imaging to examine seemingly uninteresting minerals in partially melted aluminous rocks in a new light. She first focused on quartz, using CL imaging and high resolution mineralogical maps of thin sections to identify different generations of quartz growth in the samples. This work was combined with trace titanium analysis of the quartz to assess the applicability and limitations of Ti-in-quartz thermobarometry.

She has since begun to study kyanite, using CL imaging combined with trace element analysis to identify prograde and retrograde generations of kyanite growth, typically preserved in the same crystal. The aim is to determine the possible reactions involved in kyanite growth and consumption during the metamorphic evolution of the rocks. The results of her work have implications for the behaviour of these minerals and of some minor elements during metamorphism, particularly during partial melting at high temperatures and subsequent melt crystallization.