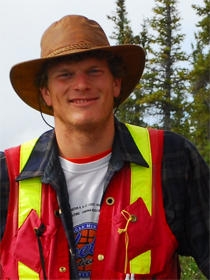 Jesse Reimink was born and raised near Grand Rapids, Michigan. In 2009 he received a Bachelor of Science degree from Hope College with a major in Geology and a minor in Biology. During his undergrad he worked with Dr. Edward Hansen on reactions between titanium-rich minerals in low-grade metamorphic rocks from the Keewanaw Peninsula, Michigan as well as mapping of high-grade gneisses in SW Sweden. He began an MSc degree at the University of Alberta in 2010 and in 2011 transferred to the PhD program under the supervision of Dr. Tom Chacko.

Jesse’s PhD project is focused on early Earth processes as recorded in the ~4.0 billion-year-old Acasta Gneiss Complex in the Northwest Territories. Specific questions that are being addressed relate to the nature and tectonic setting of crust formation on the early Earth as well as secular trends documented within the ~600 million years of magmatism present within the Acasta Gneiss Complex. Thus far, he has spent significant time mapping and sampling specific units of interest within these complexly deformed rocks.

A recently completed portion of this work focused on a particularly ancient unit that is ~4.02 billion years old. This unit contains unique geochemical signatures indicating formation in a tectonic setting analogous to modern Iceland. Ongoing work focuses on applying similar geochemical tools (whole-rock geochemistry, U-Pb geochronology, oxygen-isotope analysis of zircon) to a full suite of rocks with crystallization ages spanning from 4.02-3.4 billion years in an attempt to track the evolution of crust formation on the early Earth.