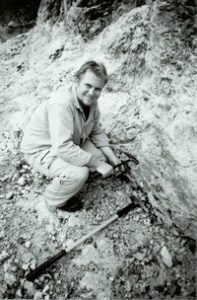 The fifth MAC Foundation Scholarship was awarded to Jacob Hanley from the University of Toronto. Jacob Hanley’s interest in geology and mineralogy began at an early age when he started collecting minerals in pegmatites around Bancroft, Ontario. Prior to his post-secondary education at the University of Toronto, he was a tour guide at the Bonnechere Caves near Eganville, Ontario where he led large groups through caves formed in Ordovician limestone and assisted visiting researchers and university students in collecting and identifying invertebrate fossils.

From 1995 to 1999, he worked towards an honours engineering degree in the Lassonde Program at the University of Toronto where he specialized in mineral exploration and received the Lassonde Scholarship in 1998. His undergraduate thesis, supervised by Prof. E.T.C. Spooner, examined alteration minerals associated with ore-grade and sub-economic mineralization in the ‘B’ and ‘C’ zones at Teck-Corona’s David Bell Mine at Hemlo, Ontario. During his four years in the Lassonde Program, Jacob worked for the Ontario Geological Survey, Golder Associates, Teck-Corona Ltd., and as a research assistant (marine geology) at the Department of Geology, University of Toronto under the supervision of Drs. G. Brown and F. Schwerdtner.

In 1999, Jacob began an M.Sc. degree at the University of Toronto under the supervision of James Mungall (assistant professor), where he studied the distribution of the halogen-group elements around footwall copper ores at the Fraser Mine (Falconbridge, Ltd.) near Sudbury, Ontario, and the potential use of these elements as pathfinder elements for such ores. During the course of his M.Sc., he also began to work part time as a consulting geologist for Terra Mineralogical Services in Peterborough, Ontario.

In 2001, he was awarded a NSERC post-graduate scholarship and began a Ph.D. thesis at the University of Toronto co-supervised by Profs. J. Mungall and E.T.C. Spooner. His research focuses on the origin of PGE (platinum-group element) deposits at Sudbury, and in the Stillwater Complex, Montana. Very little emphasis has been placed on the role played by high-temperature fluids (magmatic volatiles) in the development of the deposits. The objectives of Jacob’s Ph.D. research are to determine the composition and evolutionary path of primary, high-temperature fluids involved in the deposition and remobilization of the PGE (and Au). During the first and second years of study (2001-2002), Jacob determined (semi-quantitatively) the solubility and silicate melt-fluid partitioning behavior of Pt (and Au) in sulfur-free, high temperature (greater than 700ºC), hypersaline (20-70 wt.% NaCl) aqueous brines by trapping metal-bearing fluids in synthetic fluid inclusions and melt vesiclesand analyzing the trapped fluid for Pt and Au using laser-ablation ICP-MS (in collaboration with T. Pettke at ETH Zurich, Switzerland). The results of this study suggest that if small amounts of brine exsolve from evolved residual silicate liquids (in the absence of sulfide liquid), a significant amount (tens to hundreds of ppm) of Pt and Au may be sequestered into and transported by the brines. Currently, in the third year of study (2002-2003), Jacob is characterizing the composition of primary fluids at Sudbury and Stillwater. Analysis of single inclusions during the summer of 2003 identified many compositional similarities between magmatic brines at Sudbury and Stillwater. Recently, Jacob has found significant concentrations of Pt, Ag, and Cu in the primary inclusions, confirming that exsolved fluids at both Sudbury and Stillwater were appropriate for base and precious metal transport and may have coexisted/communicated with residual sulfide liquids during the early stages of deposit development.