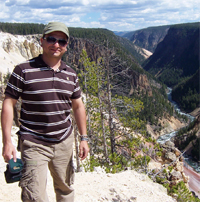 Ernesto Pecoits was born in Montevideo, Uruguay. He graduated in geology (BSc Hons) from the Universidad de la República in 2003. While studying he became the curator of the mineral collection of the Institute of Geology and Paleontology and a teaching assistant in mineralogy, geotectonics, structural geology, paleontology, sedimentology, and economic geology. After graduating, he served as staff geologist in the Department of Geology and acted as secretary of the Commission on Precambrian Stratigraphy of Uruguay. He has conducted numerous field studies on the geology of Uruguay, including studies on late Proterozoic tectonomagmatic events, the (bio)stratigraphy and geochemistry of Ediacaran successions, and the paleomagnetism and sedimentology of Paleozoic-Mesozoic rocks. As a principal investigator for a research project on the correlation between Proterozoic volcanosedimentary successions of Uruguay and similar units in South America and South Africa, and as an active participant in three IGCP projects, he had the opportunity to expand his field research to other countries, such as Argentina, Brazil, South Africa, and Canada. He has presented more than 30 research communications, including abstracts, field trip guides, book chapters, and journal papers, and he was an invited guest coeditor for a special issue on the Precambrian geology of Uruguay.

Ernesto began his PhD studies at the University of Alberta in the fall of 2006, working under the supervision of Prof. Kurt O. Konhauser and Dr. Murray K. Gingras. His PhD thesis research focuses on the Ediacaran banded iron formation (BIF) and carbonates of Uruguay and their paleo-oceanographic, paleoclimatic, and paleobiologic implications. This research project is based on the good preservation of well-exposed and poorly known Ediacaran units in Uruguay, including glacial deposits, BIF, thick chert successions, pre- and post-glacial carbonates, and black shales, and on the presence of organic-walled microfossils and shelly fauna, stromatolites, ichnofossils, etc. These rocks offer an ideal opportunity for determining the paleoenvironmental conditions in the Ediacaran oceans. The initial stages of this multifaceted work required strong field-based research, including mapping, construction of detailed cross-sections, and collection of samples. Of particular importance are BIF and carbonates, which are well-preserved chemical sediments nearly devoid of detrital input. Thus, these rocks provide a unique opportunity to assess the distribution of elements between the original iron oxide and carbonate precipitates and ancient seawater.

Despite the broad implications of this project, the main goal is to provide a better understanding of the partitioning of various trace elements in BIF and carbonates by performing microscale geochemical analyses, coupled with high-resolution petrography. Over the last two years, a new research direction focusing on rare earth element (REE) and yttrium (Y) data has been developed in order to test, first, the compatibility of a marine-precipitate origin for BIF and carbonates and, second, the involvement of microbes in iron oxides and dolomite precipitation. Accordingly, the identification of genuine marine chemical sediments through insight gained from REE+Y patterns combined with mineralogical, trace element and isotope attributes will permit more robust interpretations about the origin and conditions surrounding these deposits and will lead to a better understanding of the origin and significance of BIFs and dolomite formation.