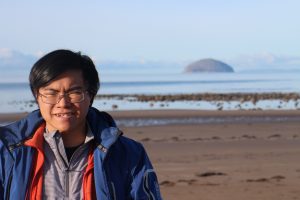 Derek Leung is a Masters by Research (MScR) candidate at the University of Edinburgh (UK) under the supervision of Drs. Florian Fusseis and Ian Butler. His research project, titled “Microscale Characterisation of Damage Evolution in Curling Stones used in International Competition” aims to understand the mineralogical and textural controls on damage to curling stones by using synchrotron microtomography, image analysis, and petrophysical testing of pristine and damaged curling stone samples.

Curling stones only come from two locations in the world: the island of Ailsa Craig (Scotland) and Trefor Quarry (North Wales). Popular media suggest that the rocks from Ailsa Craig and Trefor are one-of-akind. But what makes these rocks so special? Laying the groundwork for his MScR project, Derek developed an integrated mineralogical and textural baseline of curling stones used in international-level competition for his undergraduate thesis at Laurentian University (Canada) supervised by Prof. Andrew McDonald and Rémy Poulin.

As an aspiring mineralogist and international-level curler, combining his passions of mineralogy, geology, and curling is an immense privilege.

Derek has also worked on a new mineral species of the palygorskite supergroup (supervised by Prof. Andrew McDonald) and is broadly interested in the modulated structures of the palysepiole polysomatic series.

Outside of academia and sport, Derek divides his time on creative projects such as 3-D printing of crystallographic models, pop-up book design, and creative necktie knotting.