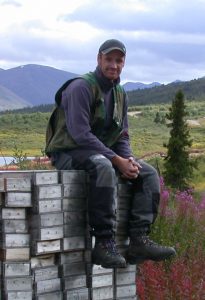 Daniel Layton-Matthews initially became interested in geology during his first year of his undergraduate degree at the University of Manitoba. During the subsequent four years, he became fascinated with ore deposits choosing to work on the alteration associated with the Mallery Lake Epithermal System in the N.W.T. as a B.Sc. Honors thesis. During his four years in Geology at the University of Manitoba, Daniel worked for the Manitoba Geological Survey, Phelps Dodge Corporation of Canada, and as a research assistant to Dr. A.C.L. Larocque.

In 1998, Daniel was fortunate to be introduced to Dr. C.M. Lesher from Laurentian University, who was on a Canadian lecture tour. During this meeting, Daniel secured a M.Sc. position at Laurentian University working on the Metasomatism of Ultramafic Intrusions in the Thompson Nickel Belt and the Implications for Mineral Exploration.

In the course of his M.Sc. at Laurentian University, Daniel was fortunate to acquire a Natural Sciences and Engineering Research Council post-graduate award for PhD studies at a Canadian University.

Again, through a lecture tour, Daniel was introduced to Dr. S.D. Scott from the University of Toronto, with whom he is currently working. His current research is a joint Geological Survey of Canada (Dr. J. Peter) and University of Toronto project on the Finlayson Lake Area Volcanogenic Massive Sulfide deposits in the Yukon, Canada. During metallurgical studies of these deposits, it was found that some deposits were extremely enriched in selenium, whereas others were not. Daniel’s research proposes to explain the distribution of selenium within/between these deposits, and to identify the origin of selenium in the sulfide mineralization.

Daniel’s PhD research to date has included Electron Probe Micro-Analysis and Synchrotron X-ray Fluorescence Micro-Analysis of sulfide minerals, which has identified stoichiometric substitution of Se for S in the lattice of all major sulfide minerals (galena: ~14 wt%; sphalerite ~1100 ppm; pyrite ~100 ppm; chalcopyrite ~300 ppm). The distribution of Se within the sulfide mineralization is characterized by increased mineral and whole-rock abundance with increased proximity to the deposit(s) footwall, where chalcopyrite mineralization is dominant. Empirically, this would suggest that the distribution of Se within these deposits is closely related to high-temperature areas of hydrothermal discharge, which is in agreement with modern seafloor systems. Currently, a selenium stable isotope study is being conducted by Daniel and will be the first attempt to apply 80Se/ 76Se ratios to “fingerprint” the source(s) of selenium in ore deposits.