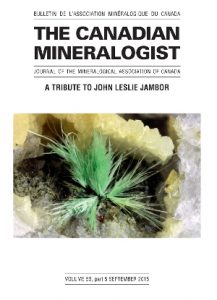 The issue is a fitting tribute, as it contains thirteen articles on themes central to John’s interests during his career.

In the first contribution, Luca Bindi and his team reestablish the validity of jamborite as a mineral species. They show that jamborite contains sulfate groups, a finding that is very fitting, as John maintained a fondness for sulfates ever since he defined gunningite, a sulfate of zinc. It was the first of 34 new species that he proposed to the IMA during his career.

There are additional articles on minerals and mineral structures, including ore minerals, always a focus in John’s work. The article on owyheeite recalls John’s membership in what might be called “The Sulfosalt Club”.

John carried out the early characterization of ore assemblages in the Strange Lake peralkaline granite, Quebec, Labrador; his findings are reviewed here.

The issue also contains an article on an anomalous distribution of Cr in clinopyroxene from Mont Royal and another on interstratified nickeliferous lizardite – clinochlore.

Finally, there are three articles on the theme of mineralogy applied to mine wastes, which held so much of John’s attention late in his career.