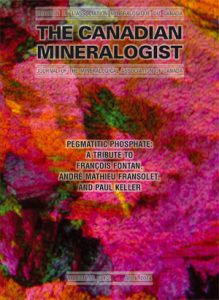 This thematic issue of The Canadian Mineralogist deals with pegmatitic phosphates.

It is dedicated to three exceptional researchers who have contributed enormously to the advancement of our knowledge of pegmatitic phosphates over the last three decades: François Fontan, Paul Keller, and André-Mathieu Fransolet.

These researchers worked individually and jointly, always in an enthusiastic, effective, and tireless way. They passed on their knowledge and interest in phosphates to many younger researchers.

Phosphate minerals are important and interesting accessories in granitic pegmatites, where they occur as well-formed crystals in miarolitic cavities or as masses that in some instances can reach gigantic proportions.

Despite being of negligible economic interest, these accessories are sought by mineral collectors and museums and they are of key importance in understanding the petrologic processes involving both single pegmatite dikes and entire pegmatitic swarms or fields.