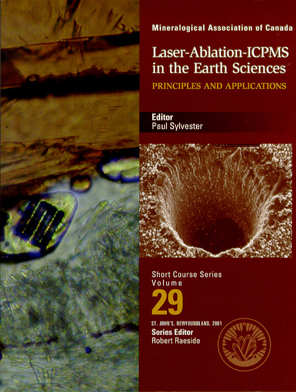 Contributors to this short-course volume describe the principles of the laser-ablation-ICPMS technique, what is being done with the method now, and what could be done in the future.

The volume will appeal to all scientists interested in solving problems with chemical data. Material is presented at the level of understanding of most graduate students in science.

This publication is no longer available as it is out of print.

An updated version of this volume has been published, see SC-40.

Laser-ablation inductively coupled plasma mass spectrometry, or LA-ICPMS for short, was first used in 1985 and has been an important analytical tool in the earth sciences since the early 1990s. In fact, it can be argued that earth scientists have been the major driving force behind the development of the method throughout the past decade. Many of the important early innovations in the technique, notably in optimizing laser wavelength, beam delivery optics and sample cell design were made in a few university earth science departments such as Memorial University of Newfoundland and University of Wales in Aberystwyth. A broad, international base of earth scientist institutions has led more recent developments such as the coupling of laser systems to collision gas cells and magnetic-sector and time-of-flight mass spectrometers…

This short course is an attempt to review established procedures and instrumentation developed for LA-ICPMS over the past decade, and to illuminate the path forward to new advances expected over the next decade.

Other Items of Interest:

Topics in Mineral Sciences Volume 44 Editor: L.A. Groat This volume has been published as a second edition to our short course volume 37, Geology of Gem Deposits. It looks at gemstones from a geological perspective and reviews our current unde [...]

Secondary Ion Mass Spectrometry in the Earth Sciences: Gleaning the Big Picture from a Small Spot

Topics in Mineral Sciences Volume 32 Editors: I. Samson, A. Anderson, D. Marshall This short-course volume covers all the basic and many advanced aspects of the analysis and interpretation of fluid inclusions. It outlines what fluid inclusions [...]