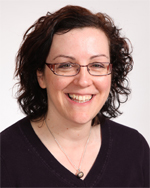 Sarah Gleeson is an economic geologist with a strong interest in the geochemistry of hydrothermal ore deposits. She does not focus on a single commodity or deposit type, but rather is more concerned with mineralizing processes. A focus of her research is the use of halogen and chlorine isotope analyses of fluid inclusions and minerals to trace the origin and evolution of fluids in hydrothermal systems.

Sarah Gleeson received a B.A. (mod) in geology from Trinity College Dublin and a Ph.D. in geochemistry from the University of London (Imperial College) in 1996. Her doctoral research, supervised by J. Wilkinson, R. Herrington (Natural History Museum) and H. Shaw, was concerned with the chemistry of formation waters and the origin of low-temperature Pb-Zn deposits in Cornwall, U.K.

Subsequently, she held a postdoctoral position at the Natural History Museum, London, carrying out research on the Cerro Matoso nickel laterite deposit, Colombia. Her next postdoctoral position, at the University of Leeds, involved moving up pressure and temperature to work with Professor Bruce Yardley on the migration of sedimentary brines into crystalline basement rocks.