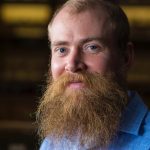 Matthew Steele-MacInnis is an assistant professor in the Department of Earth and Atmospheric Sciences at the University of Alberta (Canada).

He received his BS in Earth sciences from Memorial University in his native Newfoundland in 2008, and his PhD in geosciences from Virginia Tech (USA) in 2013. He was a Marie Curie postdoctoral fellow at ETH (Eidgenössische Technische Hochschule) Zurich (Switzerland) from 2013 to 2015, and then an assistant professor at the University of Arizona (USA) from 2015 to 2017 before moving to the University of Alberta.

Matt’s research focuses on hydrothermal fluids and how they interact with rocks, particularly in the context of ore formation. He combines field and analytical studies with thermodynamic modeling to investigate fluid-driven processes in settings ranging from subduction zones to magmatic–hydrothermal systems to sedimentary basins.

Much of his research has focused on developing quantitative tools and approaches to evaluate the physical and chemical properties of fluids, and the application of these tools in deciphering geologic processes.

Matt serves as an associate editor for the Canadian Mineralogist. He was the recipient of a CAREER grant from the US National Science Foundation and received the Hisashi Kuno Award from the American Geophysical Union in 2017.