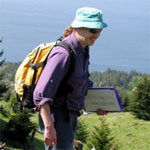 Laurence Andrew Coogan obtained his PhD in 1998, and he has since made many inroads into the mineralogical, petrological and geochemical, processes operating at mid-ocean ridges.

Laurence Coogan graduated from Liverpool University (UK) in 1993 and obtained his PhD from the University of Leicester (UK) in 1998, working with Andy Saunders and Pamela Kempton on how the lower oceanic crust is formed at slow-spreading mid-ocean ridges. This research led him to Cardiff University (Wales) where, as a postdoctoral researcher, he worked for over four years in the three major oceans and in the Troodos and Oman ophiolites. He then moved back to Leicester University as a NERC postdoctoral fellow.

Over his postdoctoral years his interests in the cooling rate of the lower oceanic crust, a key link between magmatic and hydrothermal systems, led him into the world of experimental petrology. This required learning experimental techniques for measuring diffusion and partition coefficients.

Since 2004 he has been an assistant professor in the School of Earth and Ocean Sciences at the University of Victoria (BC). His current research ranges from how is melt extracted from the mantle (1300ºC) to quantifying low-temperature hydrothermal fluxes away from the ridge axis (<50ºC).