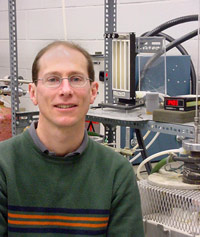 James Brenan is a petrologist and geochemist who simulates rock-forming conditions in the laboratory to understand the processes responsible for element distribution in the Earth and terrestrial planets. James was born to John and Jean Brenan in Needham, Massachusetts in 1963. He entered McGill University in the Fall of 1981, took Intro to Geology, and became hooked on the subject by the inspired teaching of A.E. ‘Willy’ Williams-Jones. James acquired a severe bias for the ‘dark-coloured’ igneous rocks under the influence of Don Francis, and it was Don who suggested further graduate studies.

James received a B.Sc. (Hon) from McGill University in the spring of 1985, then enrolled in the Ph.D. programme at Rensselaer Polytechnic Institute (Troy, NY) the following autumn. Under the guidance of Bruce Watson, James conducted experiments to better establish the role of aqueous fluids in trace-element recycling through subduction zones. For this work, he received a Ph.D. in 1990. James was a post-doctoral researcher at the Geophysical Laboratory (1990-1992) and Lawrence Livermore National Laboratory (1992-1996) before taking a faculty position at the University of Toronto. James is married to Josée Normand and has a daughter, Catherine.

The Young Scientist Award is given to an individual who has made a significant research contribution in a promising start to a scientific career. The Mineralogical Association of Canada has selected Dr. James Brenan from the University of Toronto for the 2002 Young Scientist Award. His impact on igneous petrology, fluid geochemistry and ore genesis is out of proportion to the 11 years since his Ph.D. graduation from Rensselaer Polytechnic Institute in 1990 (after a B.Sc. at McGill in 1985). During this time, he has published 18 papers in the best of the refereed journals (Nature, The Canadian Mineralogist, American Mineralogist, Economic Geology, Geochimica et Cosmochimica Acta). He is the senior or sole author on all but two of these. As well, he has contributed to five (sole author of four) significant non-refereed publications, including a 1991 MSA short course.

All of Dr. Brenan’s papers have sought answers to significant fundamental questions, and he has adopted the techniques that are best able to provide answers. His earlier research focused on fluids in the mantle and lithosphere, primarily at convergent boundaries. More recently, he has been investigating the genesis of magmatic sulfide and oxide ores. He has devised and executed key and, in some cases, ingenious piston-cylinder experiments to interpret intelligently the signatures produced by trace elements and isotopes in the products of crust-scale recycling and formation of continental crust. His strategy has been to investigate both equilibrium and kinetic aspects of fluid-mineral interactions, mechanisms of fluid migration and mineral-fluid partitioning of high field-strength elements and radiogenic isotopes. More recently, he has tackled experimentally the geochemistry and fluid dynamics of immiscible sulfides, and has furthered our understanding of Re-Os isotopic chonometry.

In another aspect of his work, Dr. Brenan has been a leader in the characterization of equilibrium textures between minerals and important fluids in the crust and mantle. He has applied some of this same approach to fluid migration during contact metamorphism. This latter work was summarized in an MSA short course and provided the first quantitative data that can be used to identify the effects of fluid chemistry on textural equilibrium.

As an indication of his intense involvement in his discipline, Dr. Brenan has presented papers at 20 conferences during the past five years and has given 10 invited talks. He has organized two Goldschmidt symposia (1997, 2001), is on the editorial board of Chemical Geology and Journal of Geophysical Research, was a presenter in a Mineralogical Society of America short course and is or has been on various national and international scientific committees. Such a high level of dedicated activity is rare for a young scientist.

In 2000, Dr. Brenan received a Premier’s Research Excellence Award. This hotly contested award is given to the best young scientists in Ontario. More significantly, Dr. Brenan is the 1998 recipient of the Mineralogical Society of America Award. This award is given annually for outstanding contributions to mineralogy, petrology and geochemistry that have been produced before the age of 35.

“I am honored to be selected as this year’s MAC Young Scientist, and relieved to know that I still qualify as ‘young’. Although I was born “south of the border”, I spent my formative years as a geologist here in Canada, and now that I have had the opportunity to teach and pursue research in this country, recognition by my Canadian peers is truly special for me.

As a child, I was quite interested in the natural world, but had no specific inclination to geology. In our family history, the closest to an ‘earth scientist’ would have been my great grandfather, who was a mortician (founder of Brenan’s Funeral Home, St. John, N.B.). However, my parents, John and Jean, were highly tolerant of my various forays into chemistry (making napalm in the garage) and biology (storing nematodes for the newts in the fridge) and were happy to get up at 4 a.m. for bird walks, balloon launches and the like. They instilled in me the great value of education and that learning is a life-long pursuit.

Upon entering McGill in the fall of 1981, my broad interest in natural science resulted in a problem: how do I focus my interests and graduate in a timely fashion? Professor A.E. ‘Willy’ Williams-Jones solved this dilemma for me. In addition to being a first-rate scientist, Willy is a great teacher, and after taking his intro to geology course, I was hooked. Once a particular area of endeavor is chosen, whether one continues on that path, and in what direction, is very much influenced by the people you meet along the way. My initial path at McGill was to Gertrude’s Pub, but this was somewhat altered one Friday afternoon during one of the many social events sponsored by McGill’s Department of Earth and Planetary Sciences. I was sitting with a group consisting of Don Francis and his students when Don abruptly turned to me and said in an accusing tone “Why aren’t you doing research?” I had no good answer for him, and the following summer found myself mapping peridotite with M.Sc. student Benoit Rivard in the black-fly-infested woods east of James Bay. Despite the physical challenge of this mapping exercise (which I repeated the following summer!), my enthusiasm for geology, and specifically igneous petrology, only grew. In addition to field observation, both Don and Bob Martin emphasized the importance of experimental work as a powerful tool for understanding igneous rocks. As such, when I expressed an interest in doing graduate work, Don suggested a fellow named Bruce Watson at a school in the states known as Rensselaer Polytechnic Institute.

When I started my Ph.D. in the fall of 1985, mantle metasomatism was a hot topic, yet the agents of mass transfer in the upper mantle were poorly constrained. Bruce had already recognized this as a problem that experimentalists could help to solve, so he suggested it as a thesis topic. Being young and naive, I had no idea that high P-T experiments involving aqueous and carbonic fluids were notoriously difficult, and began my work with enthusiasm for early success. Not unexpectedly, I did not have my thesis work done in six months. Fortunately for me, Bruce is a master of experiment design, and the unwritten lab credo was “you won’t know if it’s going to work until you try it”. The eventual success of my experiments and completion of my thesis was a direct result of that influence. It was this “upbringing” that has also allowed me to achieve some measure of success on an even greater current experimental challenge, which is sorting out the geochemistry of the platinum-group elements.

After acquiring my Ph.D., I was a post-doc at the Geophysical Lab and then Lawrence Livermore National Lab. The post-doc at Livermore was one of the most productive times in my research career, mainly because the Lab had the key combination of facilities for both high P-T experiments, and in situ trace-element analysis. With Doug Phinney, Ian Hutcheon and Henry Shaw running the ion probe, and Rick Ryerson’s expertise in the experimental lab, we were the first to produce a reasonably comprehensive database for fluid-mineral trace-element partitioning. Rick also taught me the art of distilling a problem to its essential components, allowing one to formulate ‘silver bullet’ experiments, thus providing results with the highest impact.

Since 1996, I have been a faculty member in the Department of Geology at the University of Toronto. Given its very large size, U of T can seem like a cold and faceless entity. Fortunately, I have been warmly received by my colleagues in the department, and am particularly grateful to Tony Naldrett, Jeff Fawcett and Grant Henderson, who have been generous with both their insight on the workings of the university and in helping me to establish my lab. I also thank Steve Scott for nominating me, and for his very generous citation.

Graduate students are at the core of any successful research program, and I have been very fortunate to have been able to attract an excellent group of young and eager individuals, including Dave Andrews, Natalie Caciagli, Craig Finnigan, Lesley Rose and Parisa Sattari. Not only do those guys work really hard, but they have an enthusiasm for their own research which makes my job really worthwhile.

Finally, I’d like to say that I would not be standing here today without the loving support of my wife, Josée. She has patiently endured all those times when I said “I’ll be leaving the lab in 10 minutes”, but not to return home for two hours. I’d also like to thank my daughter Catherine for helping me retain my perspective.”