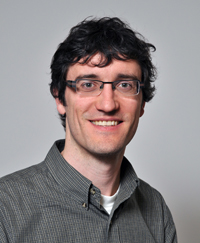 Chris Herd is a mineralogist and petrologist with varied interests in planetary geology, best described under the heading of comparative planetology. He has studied the mineralogy, petrology, and geochemistry of meteorites from Mars using experimental petrology and microbeam analytical methods, and he currently has an active research program in the origin and geologic evolution of the planets in the solar system.

Chris completed his undergraduate degree in geological sciences at Queen’s University in 1997. His interest in meteorites from Mars took him to the University of New Mexico in Albuquerque for his PhD, which was fully funded by a NASA graduate fellowship. In 2001 he moved to the Lunar and Planetary Institute in Houston, where he worked as a postdoctoral fellow with access to the facilities at the Johnson Space Center.

He was hired in July of 2003 by the Department of Earth and Atmospheric Sciences at the University of Alberta, where he was awarded tenure in 2008. He teaches Introductory Mineralogy in the geology program, Geology of the Solar System for non-majors, and an advanced course in Planetary Geology. In addition, he has curatorial responsibility for the Alberta Meteorite Collection, the largest university-based meteorite collection in Canada.