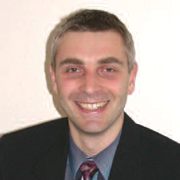 Anton Chakhmouradian wanted to be a geoscientist from childhood, so the Faculty of Geology at St. Petersburg State University (SPbGU) was a natural choice when he graduated from high school. This also proved to be the right choice because SPbGU had long been a hub for research on carbonatites and alkaline igneous rocks. SPbGU Professors Andrei Bulakh and Mikhail Evdokimov were instrumental in communicating the ‘alkaline virus’ to Anton and making sure that this petrologically biased affection evolved into a postsecondary degree. After graduating with an MSc and PhD in geology and mineralogy from SPbGU in 1997, Anton moved to Canada to pursue postdoctoral research on perovskites with Roger Mitchell. In 2001, he took a faculty position at the University of Manitoba. Even after having relocated to the Prairies, he continues to find inspiration in alkaline rocks and carbonatites.

Dr. Chakhmouradian is an eminently suitable candidate for the Young Scientist Award. Since finishing his PhD, he has established himself as a mineralogist with an international reputation. He is interested in alkaline rock petrology and in the mineralogy and crystallography of the minerals comprising these rocks. In particular Dr. Chakhmouradian has undertaken significant novel work on perovskite-structured minerals and their synthetic analogues. Objectives of this work are:

In addition he has made considerable advances in understanding the paragenesis and evolution of sodic versus potassic peralkaline pegmatites. His papers on the mineralogy and petrology of the Gordon Butte and Pegmatite Peaks potassic pegmatites will become classic references as they represent the first detailed studies of this type of pegmatite. Dr. Chakhmouradian’s work has been presented in reputable international refereed journals with more than 30 papers published over the last 5 years; importantly, many of these papers have appeared in The Canadian Mineralogist. All of this work will have lasting significance.

In recognition of his expertise he has also been invited to contribute to two important books: Phoscorites and Carbonatites; and The International Encyclopaedia of Minerals. These publications will serve to enhance further his international reputation.

Dr. Chakhmouradian is an extremely knowledgeable and hard working young scientist who employs modern analytical and experimental techniques to mineralogical problems. As such he has already made significant advances in this field. Now that he is employed at the University of Manitoba, because of the wide variety of analytical equipment located there, he is in a position to make further substantial contributions to the mineralogy and petrology of alkaline rocks.

In summary, I consider that Dr. Chakhmouradian is just the type of young person for which this award was established and hence is a bona fide candidate for the medal.

It is a tremendous honor to be here today for this award, and the fact that this occasion coincides with the celebration of MAC’s 50th anniversary makes it even more momentous for me. I must say that MAC Council chose ambush tactics for communicating this astounding news to me, as if they were making sure I would remember that day forever. I recall myself going through Pierrette’s memo with an agenda for the May Council meeting and, all of a sudden, seeing my name next to the line ‘Young Scientist Award’. My most immediate reaction was that there ought to have been some sort of mix-up because I never win anything! Secondly, I thought to myself, MAC may be in need of many things (like volunteers, for example), but there certainly has never been any shortage of young talented people in this organization. As I was pondering on Pierrette’s memo, seeking, perhaps, an alternate meaning to the words ‘The Young Scientist award will be awarded to’, Norman’s head poked through the doorway, and he asked, “So, did you win anything lately?”

As I came to realize that MAC was not pulling a practical joke on me, I also realized that this prestigious award is not as much recognition of my achievements, as a tribute to all the wonderful people that have supported and encouraged me, and all the magnificent places that have inspired me. I was fortunate to grow up in St. Petersburg, a city known for its rich and sustained academic traditions. Among its innumerable cultural attractions, St. Petersburg is home to three splendid mineral collections, two of which trace their origins to the Siberian exploits of Severgin, Archbishop Nil, and many others in the 1700s and 1800s. One day, my dad took me to the museum in the Mining Academy, one of the largest mineral collections in the world, and, as soon as I saw a 3000-pound malachite colossus from the Urals and a plate of Alaskan schist studded with almandine crystals, I was ‘hooked.’ I soon learnt that all minerals and rocks had a story to tell, but it is only a select caste of people who can understand their language (and I don?t mean the crystal healers). Thus, in grade 5, I decided I wanted to be nothing but a geologist.

My interest in Earth sciences grew, and the Department of Geology at St. Petersburg State University was a natural choice when I graduated from high school. At university, I met a number of fantastic people who would then have a defining influence on my choices in career and life. First and foremost, I would like to extend my heartfelt gratitude to my wife Katya for her love and support over the past sixteen years, and also for putting up with piles of journals and analytical data on our dining table, as well as my perpetual attachment to a laptop and frequent detachment from family activities and house chores because ?my grant proposal is due at the Office of Research Services tomorrow.? At the university, I also met my future advisors, Andrei Bulakh and Mikhail Evdokimov, who introduced me to the exotic realm of carbonatites, melilitolites, ijolites, and other alkaline rocks, whose correct pronunciation is as disputable as their genesis. My advisors generously shared their time and wisdom with me and made sure that my petrologically biased affection evolved into postsecondary degrees.

My first exposure to the western approach to ‘doing science’ took place in 1992 when I was on a student-exchange leave at the University of California – Berkeley. In this regard, I would like to acknowledge Rudy Wenk for teaching me the importance of cutting-edge analytical techniques and computer tools for petrologic and mineralogical research. Following my graduation in 1996, we moved to Thunder Bay, where I was offered a Post Doctoral Fellowship appointment with Roger Mitchell. Roger is such a towering figure in alkaline petrology that I accepted his invitation without hesitation. The two most important things I learnt from Roger were that every good petrologist also has to be a good mineralogist (and vice versa) and, secondly, that we should not discard any accessory minerals as insignificant. Every little speck of dust that we come across in a rock holds clues to how that rock has formed. I am immensely grateful to Roger for that. My work at Lakehead would not have been possible without the expertise of the staff of the Instrumentation Lab and, particularly, its director Allan MacKenzie. I must also say that Roger and Valerie, and Allan and Judy MacKenzie went out of their way to make us feel at home in Thunder Bay and reduce the culture shock. Since 2001, we have been calling Winnipeg home and, needless to say, the Department of Geological Sciences at the University of Manitoba is the kind of work setting that would make any mineralogist happy. Everyone at U of M has been great, but I would particularly like to acknowledge Norman Halden and Frank Hawthorne for their mentorship and for guiding me through the ‘painful’ metamorphosis of passing from a post-doc to a university professor.

My research has always been collaborative, and I am indebted to all my collaborators, past and present, for their enthusiasm, insight, and patience. There is one name that I would like to single out and add to the ones I have already mentioned. It is that of the versatile carbonatitologist, my good friend and field companion Anatoly Zaitsev. About 30% of my published work has come out in The Canadian Mineralogist, which I honestly consider to be the most balanced, the most democratic, and the most aesthetic mineralogical journal in existence. None of it would have been possible without the dedicated efforts of Bob Martin, to whom I also extend my gratitude

Last, but not least, I would like to thank my three-year-old son Darian for teaching me that there is more to life than minerals and for his keen interest in my PowerPoint presentations.