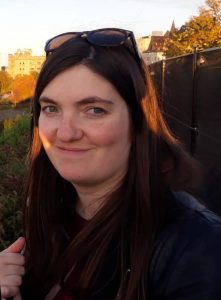 The 2021 Young Scientist medal has been awarded to Dr. Anna Harrison, an aqueous environmental geochemist with the CNRS (Centre National de la Recherche Scientifique, France) whose research interests broadly lie in studying the mechanisms by which elements are cycled between minerals and fluids in natural and engineered environments, and how we can harness chemical processes to limit environmental degradation.

Anna’s research focus and research team has been on the potential use of mineral weathering to capture CO2 for climate change mitigation and the fundamental mechanisms that control mineral weathering in the unsaturated zone. Recently they have begun to explore the behaviour of non-traditional stable isotopes during mineral weathering and carbonate precipitation and its application to understanding both natural weathering and tracing captured CO2. She received her BSc from the University of Alberta and her PhD from the University of British Columbia in 2015. She was a postdoctoral fellow at Stanford University, an NSERC postdoctoral fellow at Geoscience Environment Toulouse (a part of the CNRS), and a Marie Skłodowska-Curie fellow at University College London. Anna was an Assistant Professor in Environmental Geochemistry at Queen’s University before recently returning to France to join the CNRS (Centre National de la Recherche Scientifique).