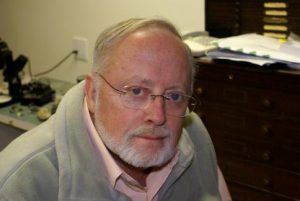 William “Bill” Pinch was born on August 15, 1940 in Hornell, NY, and made his home in Rochester, NY for his entire life.  His father, Wallace Pinch, worked at Kodak, and his mother, Frances Foster, was a nurse at Strong Memorial Hospital.  After his parents separated, Bill was raised by his mother, whom he credited with greatly encouraging his intellectual pursuits, in particular his passion for minerals.

Bill went off to college at the University of New Mexico, but, despite tremendously enjoying his mineralogy studies, he did not find the rest of the college experience sufficiently stimulating, and he left after one year.  Returning to Rochester, he accepted a job in the research division of Eastman Kodak Company, where his role was, using x-ray diffraction, to document the identity and crystal structure of new compounds grown in Kodak’s solid state research facility.  He was allowed to use the equipment after hours to study minerals, giving him an understanding of mineral identification techniques far beyond the average collector, and setting the stage for his scientific collaborations.

In 1974, Bill founded, along with the Jensens, the Rochester Mineralogical Symposium, designed for professional and amateur mineralogists to gather for formal and informal discussions of mineralogical topics.  By 1979, Bill had decided to leave Kodak and devote his full efforts to his mineralogical pursuits.  Subsequently, he worked for Ward’s and later World of Science as a buyer, and was a buyer of major gemstones for Investment Rarities in the early 1980’s. He also consulted for the Russian (then Soviet) government, visiting mines in the Urals and Siberia, to discuss how to market Russian minerals.

The acquisition of the first two volumes of Dana’s System of Mineralogy began his life’s occupation with the serious study of minerals, and with the purchase of mineral books.  Bill eventually is largely responsible for the identification of at least twenty new species, and contributed to the first descriptions of the crystal structures of many more. He is a world-renowned mineralogist and a larger-than-life collector of many of the Earth’s rarities, including minerals, gems, fossils, shells, botanicals, and rare books. He is an expert discoverer of new mineral species and assisted with the description of many unknown or rare minerals. He is also a generous lecturer and teacher, a cofounder of the Rochester Mineralogical Symposium (USA), and a prolific contributor to the mineralogical literature.

Ladies, gentlemen, and fellow mineral collectors, I feel doubly honoured to receive this medal. In the first instance, the initiation of this award is very appropriate in that, for the first time, it gives formal recognition to the many serious mineral collectors who have contributed to the science of mineralogy. I am very gratified that the first award, the “type specimen” so to speak, has been given to me. In the second instance, the medal is in my name, an honour that most people who have had medals named after them were not around to appreciate. It is the greatest honour of my life, and as just pointed out to me, I am still alive to enjoy it.

First and foremost, I thank my wife Jackie for her love and support throughout our marriage. Before we got married, I told Jackie that there was one thing that she needed to know about me… I collect minerals. At the time, I don’t think that she realized what that meant. If she didn’t know then, she definitely knows now. With me, mineral collecting hasn’t been a hobby; it has been an obsession. But she has stuck with me through it all, and deserves this medal at least as much as I do. I also thank all of you out there, every dealer who has let me look through his stock, every mineral curator who showed me his collection, every person who has stopped me to show me a mineral and ask or answer a question, and every mineralogist who has done any work on a specimen of mine. In my many years in this business, I have found that the more you look, the more you learn. Helping the professional has only helped me to learn more about mineralogy and to learn what it is that the professionals need to accomplish their goals. Every time a specimen is worked on, it becomes a better-documented specimen, a benefit both to science and to the collector.

I take this opportunity to thank all the dealers, collectors, and professionals who have made the Rochester Mineralogical Symposium a success. A mineral collector who is not satisfied with the information on the label and wants to learn further is a serious collector, and the Symposium was initiated to bring the serious collectors and the professionals together to share information and to learn from each other. The Rochester Symposium has become a great success in this regard, as has the MSA/ Friends of Mineralogy Symposium at Tucson.

I wish to thank the Mineralogical Association of Canada for initiating this award and Frank Hawthorne for presenting it to me today. And in conclusion, I want to mention one aspect of this matter that gives me great pleasure: Frank has won nearly every medal I can think of, but he’ll never win this one!