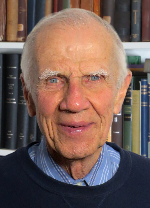 Peter was born in Montréal, Canada, in 1934. He holds a bachelor degree in metallurgical engineering from McGill University and a doctorate in chemical metallurgy from the Massachusetts Institute of Technology.

He first became interested in minerals at the age of 10 and took an introductory course in geology at the young age of 12. His interest was encouraged by his parents, teachers and a Boy Scout leader. He soon discovered the mineral collection at the Redpath Museum at McGill University which further developed his interest and knowledge in systematic mineralogy. It is at this time that Peter began to amass what is now a large, systematic collection with an emphasis on minerals from alkaline rocks. As an undergraduate student in 1953, Peter had the opportunity to work for the Geological Survey of Canada in the Yukon Territory which resulted in a mineralogical term paper and a dynamite-box of mineral specimens. Peter was further introduced to the New England pegmatites by members of the Boston Mineral Club while he was a graduate student at MIT.

Peter’s professional career was in research and development in Canada’s mining and metallurgical industry. Upon returning to Canada he worked as a research engineer with the Québec Iron and Titanium Corporation in Sorel, Québec for two years, and spent the rest of his career with the Noranda Research Centre, of Noranda Inc. a major Canadian mining and natural resource company. At the time of his retirement in 1991, he was Vice President and Chief Scientist.

Peter began to explore and collect at some of Canada’s most important localities. In 1962, he discovered the Saint-Amable alkaline sill (Demix-Varennes quarry), first visited the now world-famous site of Mont Saint-Hilaire in 1963 and has been collecting there continuously until the present day. After his retirement, Peter turned his energies towards mineralogy and ornithology.

Peter has made it his life-long goal to document the geology and mineralogy of Mont Saint-Hilaire – he has committed the last 50 years of his life to this endeavor, longer than that of any known collector. Of the >400 mineral species found at MSH, Peter has been the first person to identify at least 35 of these species. In addition, his collecting and subsequent examinations have resulted in him discovering 12 new species from not only MSH but other alkaline localities. Considered to be  the dean of Mont Saint-Hilaire mineral collectors for his long and sustained contributions to Mont Saint-Hilaire mineralogy, Peter was honored with having the new species, petarasite, named after him in 1980 by George Y. Chao, T. T. Chen, and J. Baker.

Peter’s dedication to systematic collecting, curating of his own collection, and keeping and maintaining an archive of accurate, detailed historical and scientific information has been of great benefit to the mineral sciences community in Canada and world-wide. Researchers have benefitted from his generosity in providing specimens and information for their studies. Peter has also authored or co-authored many articles in scientific and popular mineralogical publications. Peter has been a member of the Mineralogical Association of Canada since 1964, and was a member of the Mineralogical Society of America for more than 30 years.

In addition to providing to the scientific community, 14 years ago Peter returned to his roots to work as a volunteer at the Redpath Museum where he has helped to completely renew the mineral exhibits, reorganize the mineral collection, and has written a scientific guide to the mineral gallery. He is an associate at the museum with the title of Honorary Curator of Mineralogy. Peter knows where his passion for the minerals sciences began and he is doing his utmost to ensure that the next generation has the same opportunities that he did.

The MAC has enjoyed a very long, positive relationship with the mineral-collecting community. We have supported this community through our publications and outreach initiatives, including the 2017 Mineral calendar, which is available at this show.

Additionally, the MAC also awards the Pinch Medal, in recognition of an individual who has made substantive contributions to the mineral sciences. The medal recognizes so-called amateurs but there are also many individuals whose passion, interest and drive elevate them well beyond the common hobbyist and truly, to the professional level

This year’s Pinch medal winner is Dr. Peter Tarassoff, an outstanding mineral collector with extremely keen observational skills and who has used these skills not only to recognize several potentially new minerals but also to carefully document their occurrence, the latter being critical in providing geological context in relation to the occurrence of a mineral. Much of the collecting and documenting that Peter has been involved with has focused on the alkaline rocks in the Montreal area, including the Magic Mountain, Mont Saint-Hilaire (which he first visited in 1963) and the St. Amable sill. He has had life-long interest in the science of mineralogy, so it was fitting that he go on to earn a Ph.D. in chemical metallurgy in 1962 and to work in the mineral-processing and mining sector for pretty much the next three decades. Still, his passion continued to draw him back to mineralogy; I suppose you could say that for a short while, his job got in the way of his career. Still, he found ample time and opportunity to collect, document and write about all-things mineralogical, including the Orford mine, the St. Amable sill, the Francon quarry and of course, Mont Saint-Hilaire. Retiring in 1991, Peter renewed his passion to aid in organizing displays and the collection of the Redpath museum, a place that is near and dear to him. A wonderful initiative for such a humble, yet accomplished, mineralogist.

In closing, behind every great person stand an equally great partner and in this regard, Ann, his partner of many years who has allowed him to equally ‘play’ for many decades. For this, we are all richer and I extend my sincere gratitude to her for allowing Peter his indulgences.

I am honored and pleased to accept the 2017 Pinch Medal. I feel privileged to join the distinguished ranks of previous medal recipients. I am also humbled by knowing that there are many other deserving individuals in the mineralogical community. I wish to express my heartfelt thanks to the Mineralogical Association of Canada, the members of the Pinch Medal committee, and to those who submitted and supported my nomination.

Minerals have been a passion since I was young. My journey began with a children’s book about minerals in the local library in Verdun, Quebec, and my fascination with samples of gold ore that my father kept from his days as a miner in northern Ontario. My parents started me off on a serious note by giving me Dana’s Textbook of Mineralogy and A Textbook of Geology. Our kitchen gas stove became my mineral laboratory when they gave me Orsino C. Smith’s Identification and qualitative chemical analysis of minerals. Attaching a Bunsen burner, I learned to conduct blowpipe and wet chemical tests. My interest in minerals was encouraged by my high school chemistry and physics teachers, and a Boy Scout leader. Earning a Boy Scout prospector’s badge included a short course in geology. There were no mineral clubs in Montreal at the time. Mineral field collecting opportunities were very limited, but all sorts of rock and mineral samples for prospectors were available from the Geological Survey of Canada for 5 to 25 cents (even pitchblende!). Early on I discovered the Ferrier systematic mineral collection at McGill University’s Redpath Museum. I got to know it well and it became my reference collection.

At the end of my sophomore year in engineering at McGill University I worked in the Keno Hill area of the Yukon Territory on a Geological Survey of Canada field party headed by the eminent geoscientist Dr. R.W. Boyle. With Bob Boyle’s mentoring I wrote a prize-winning summer term paper on the mineralogy of the Bellekeno mine. But engineering continued to beckon, and I decided to pursue metallurgical engineering as a career. Happily, the metallurgical engineering curriculum included a course in mineralogy. From McGill I went on to graduate school at the Massachusetts Institute of Technology. I joined the Boston Mineral Club which met at the Harvard Mineralogical Museum, and I was befriended by a group of older collectors who introduced me to New England pegmatites.

When I returned to Canada in 1962 I joined the Montreal Gem and Mineral Club, and soon after, the Mineralogical Association of Canada which has been an important part of my mineralogical and geological education through The Canadian Mineralogist. In 1962 the mineral treasures of Mont Saint-Hilaire had just been discovered and I soon found specimens of what the late professor Guy Perrault at Ecole Polytechique called ‘fmdk’ funny mineral don’t know. They did not remain ‘fmdk’ for long as I was fortunate to develop a collaboration with mineralogists in the academic and institutional communities. They played no small role in my being here to accept the Pinch Medal. I would like to specifically mention: professor George Chao at Carleton University; professor Andrew McDonald at Laurentian University; Robert A. Gault, Dr. Joel Grice, Dr. Paula Piilonen and their colleagues at the Canadian Museum of Nature; the late professor André Lalonde at the University of Ottawa; and the late Ann Sabina at the Geological Survey of Canada.

I am also grateful to professor Jeanne Paquette at McGill University who invited me to collaborate in developing new exhibits at the Redpath Museum emphasizing the relationship between minerals and their geological environment. My ongoing association with the museum as an honorary curator has been a source of much satisfaction.

I would also like to thank my wife Ann for her understanding as I went off on numerous field trips and otherwise pursued my mineralogical interests. She is not a mineral person but is my best mineral collecting find  I met her during a field trip to Thetford Mines, Quebec, while I was still a graduate student in Boston.

My mineralogical journey began over 70 years ago and it has given me a great deal of pleasure and intellectual stimulation. The Pinch Medal represents a culmination of that journey and I thank the Mineralogical Association of Canada for bestowing this honor on me.”