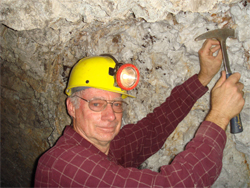 Joe Marty was born in 1945 and became interested in minerals as a college student when he began collecting lapidary material. Joe’s serious field-collecting career began in the Thomas Range, after he moved to Utah. His excursions eventually took him throughout much of the Western United States, but his most successful collecting activity focused on Utah, Colorado and California. Joe recently retired from the faculty of the Department of Pathology at the University of Utah where he taught hematopathology to a generation of pathology residents. As a medical technologist he studied crystals in joint effusions from patients with acute arthritis, thereby becoming skilled in identifying crystals in synovial fluid (see bibliography); that expertise readily transferred to mineralogy.

Joe had the opportunity to examine crystalline specimens from the Hidden Treasure mine in the late 1980s, and this kindled his passion to study and photograph microminerals. As his expertise grew, Joe shared his knowledge of mineral occurrences through talks illustrated by photomicrographs of self-collected specimens. He has given lectures at many of the major mineral clubs in the United States and Canada. In recognition of his many contributions to the study of micro minerals, he was inducted into the Micromounters Hall of Fame in 2005.

As an amateur mineralogist, Joe’s avid and productive field collecting and sharp eye for the unusual have led to notable scientific achievements. Joe discovered or participated in the discovery of an astonishing 44 new mineral species (see list below), and work continues on a number of others. He is also the co-author of the mineral descriptions on most of the species he discovered (see bibliography). As far as we can tell this must be a record number of new species for an amateur collector, and what is even more remarkable about half of these discoveries were made in the last two to three years. Joe has authored or co-authored numerous mineralogical articles, which are presented in his attached bibliography. His self-collected specimens are represented in the collections of universities and major museums, many as the type specimens for the species he discovered. Joe’s recent work has added to our knowledge of vanadium and tellurium mineralogy (see references). He is engaged in an ongoing collaborative study of decavanadate species with a group of academic mineralogists. Martyite, a zinc vanadate, was named after Joe in recognition of his many contributions to mineralogy. Joe is a very skilled photographer of micro crystals and his photos appeared in numerous publications.

In our mind the criteria for the evaluation of nominations is quite clear, because amateurs have a limited number of ways to make important contributions to the science of mineralogy:

Joe Marty in our opinion more than meets the above criteria.Considering Joe’s incredible portfolio of achievements and sustained and very valuable contributions to the science of mineralogy, we unreservedly and enthusiastically nominate him for the 2015 Pinch Medal.

Additional supporters:
It is truly amazing the number of new mineral species that Joe has discovered and helped to study. Joes field collecting has recently lead to the discovery of more decavanadate minerals than had previously been known and has allowed us a much deeper understanding of the crystal chemistry of this structurally rich family of minerals. He has done this with an enthusiasm, personal drive and dedication that I have rarely seen and I am grateful to him for his persistence. His diligence, however, has always been cloaked with humility and graciousness and it has been a great pleasure to work with him. Given the criteria for the Pinch Medal I cannot think of a more deserving individual for this award. His contributions to the science of Mineralogy are truly significant.

Joe is an extremely avid mineral collector, and one who has a remarkable eye for distinguishing new phases. He currently specializes in new minerals from uranium/vanadium mines on the Colorado Plateau, and has discovered a remarkable number of new species. Joe has an uncanny eye for new minerals, and is a meticulous collector. His collection is remarkably curated and photographed. He has a strong working relationship with professional mineral scientists, with whom he collaborates to see the minerals through to official species status. Although interested in the collecting aspects of mineralogy, Joe always ensures that the maximum amount of data attainable is achieved from every new mineral that he discovers.

I have collected in the field on numerous occasions with Joe. His primary focus is always on finding specimens that will benefit science rather than enrich his collection. He never hesitates to provide his best specimens for scientific research, even if they are his only specimens of a species. He is remarkably effective in gaining access to mines because he is conscientious and scrupulous in his dealings with mine owners, managers and personnel.

“I am honored and excited to receive the Pinch Medal, named after Bill Pinch for his many contributions to mineralogy. I am grateful to Ron Peterson and Lee Groat from the Mineralogical Association of Canada, along with members of the selection committee. I appreciate the letters of support and backing from former Pinch Medal recipients Laszlo and Elsa Horvath, Renato and Adriana Pagano, Mark Feinglos, and Roy Kristiansen.

I would not be receiving this honor were it not for the help of many professional mineralogists such as Tony Kampf of the LA County Museum now retired, but still working more than full time describing new minerals. John Hughes at the University of Vermont and John Rakovan from Miami University are not only brilliant scientists but two of the nicest guys you will ever meet. Barbara Nash from the University of Utah, Anatoly Kasatkin, Moscow, Russia, Jakub Plášil, Czech Republic, Stu Mills from the Museum Victoria in Australia, and Bob Housley from California Institute of Technology also contributed to the new minerals we discovered.

Finding and studying minerals has given me a great deal of joy. More importantly it has allowed me to meet many wonderful people and to develop lasting friendships. These friends include the pharmacist from Mammoth, Arizona, Joe Ruiz, the lady with Rocks & Minerals, Marie Huizing, the tax accountant from Shingle Springs, California, Mike Kokinos who teaches optical mineralogy to mineral enthusiasts, Jerry Baird of Lake Havasu who puts on mineral seminars for retirees, the mineral photographer, Sugar White, and the tinkerer from Troy University, Henry Barwood. There are many individuals who volunteer their time in leadership positions with mineral clubs and associations including Al Wilkins and Tim Rose in California, Phil Richardson in Phoenix, Arizona, Dana Wilson in Salt Lake City, Utah, and Mark Ascher with TGMS. I appreciate the mine owners who have allowed us access to their properties to collect minerals. I want especially to thank the Professional Geologist and micro-mineralogist extraordinaire, Dick Thomssen who has been my mentor and helped so many other novices. I also want to thank my collecting buddies who have spent time in the field with me searching for minerals.

Most of all, I appreciate the steadfast support of my wife, Petrea.