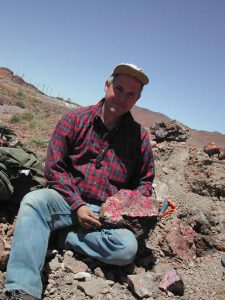 Georges Favreau’s life-long journey into the world of mineralogy began at a young age when he was presented with a microscope by his parents, who long supported his mineralogical passion. With this, he was able to explore the micro-world of mineralogy which opened up a new venue into the natural world. He collected at many of the famous localities in France, including the uranium mines of the Lodève area, the Trimouns talc quarry, the Jas Roux Tl deposit and of course, the great Cap Garonne copper mine.  Collecting in these areas helped him develop a taste for regional geology and a personal quest to describe the local mineralogy associated with them.

In the early 1990’s, Mr. Favreau embarked on life-changing venture through a trip to visit the five-metal mines at Bou Azzer and the copper mines at Touissit, Morocco.  Little was known of the mineralogy of these areas, so this became a key focus of his collecting and studies.  These localities were followed by visits (with his collecting companion Robert Pecorini) to the Imiter silver mines, collecting at phosphate pegmatites, the Tachgagalt Mn deposit and the Bou Skour district, all in Morocco.

His scientific interests have been primarily in the area of arsenate and copper minerals, which has led him to be involved in the discovery of new minerals as yvonite, jacquesdietrichite, bouazzerite, afmite, forêtite, omsite, alfredopetrovite and écrinsite to name just a few.  Additionally, he has provided material that led to publications on the crystal structures of known minerals, including matulaite, camerolaite and parnauite.  It is through his collaborations that relationships with well-known mineralogists, including Halil Sarp, Nicolas Meisser, Tony Kampf and Stuart Mills, were established and continue to this day.

He has been a strong supporter of Mindat, serving as an Administrator there since 2010.  He is a founding member of Associazione Micromineralogica Italiana (and regular translator for their magazine) and Géopolis, an association for the defense of collector’s interests and diffusion of knowledge in France.  He is also an honorary member of Association des Amis de la Mine de Cap Garonne and member of the research team dedicated to holistically understanding the complex mineralogy found there.  His list of collaborations with amateur mineralogists is long, but includes Philippe Roth from Zurich (CH), Dick Thomssen from Tucson (AZ) and Joe Marty from Salt Lake City (UT) to name just a very few.

The Pinch Medal, awarded biannually by the Mineralogical Association of Canada, is bestowed in recognition of the outstanding, long-term efforts of an amateur mineralogist.

We are proud to announce that the 2021 recipient is Mr. Georges Favreau of Aix-en-Provence, France.

Mr. Favreau (b. 1961) is an engineer by training, but a mineralogist by passion.  He has served as President of the Association Française de Microminéralogie (for which the mineral afmite is named; 1993-2007). He is an avid field collector working in such exotic locales as Bou Azzer (Morocco) but also in those in his own backyard (Cap Garron, France).

Mr. Favreau has contributed to the discovery of 16 new minerals and has authored or co-authored numerous articles related to the mineralogy of France, Italy, Germany and Spain.  Perhaps one of his greatest achievements was serving as the senior author of the book Cap Garrone.

Mr. Favreau is a member of the Micromounter’s Hall of Fame (2002), is a much sought-after lecturer and the creator of FACES, used to illustrate the morphology of crystals.

It is with immense pride that the Mineralogical Association of Canada awards the 2021 Pinch Medal to Mr. Georges Favreau.  He reflects the high standards of an individual with a deep passion for mineralogy and one that works tirelessly to promote it and is truly an ambassador for mineralogy on the world-wide stage.