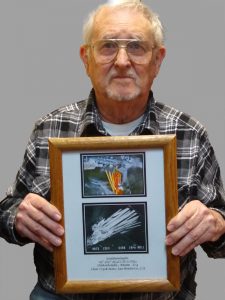 Mr. Dunning was born in 1937 and attended schools in Saratoga and Morgan Hill, CA before enrolling in Hartnell College at Salinas, CA in 1955. There he met Fenimore (Fen) Cooper, geology major who became a lifelong friend and collecting partner.

After completing his studies at Hartnell, Gail transferred to the UCLA (Berkeley) and majored in physical chemistry. Following these years, he accepted a position with the General Electric Company in 1959 as a chemist of radioactive materials and later as a senior metallurgical engineer overseeing the materials testing laboratory, where he became proficient in X-ray radiography, mechanical testing, heat treatment, metallography, corrosion testing, and scanning electron microscopy with EDS.

During the years from 1962 to 1976 (with a two-year period in the Army assigned to entomology studies), he and Fen Cooper traveled throughout California, Nevada, Oregon, Arizona, Utah and Colorado collecting and studying mining sites and collecting rare and unusual minerals.  Their most active and rewarding field collecting was done at the Kalkar Quarry in Santa Cruz, which was known to contain a suite of rare and unusual lead-tin containing minerals.  It was at this quarry that they discovered their first new mineral, a fluorescent mineral that resembled scheelite but turned out to be the tin analogue of benitoite (they first called it “tin benitoite”) until it was formally described and named pabstite after Dr. Adolf Pabst of the University of California (Berkeley).  During this time period they wrote extensively of their findings and the mines they visited.  Together, they authored more than twenty articles.  These descriptive papers were published in a number of prominent publications.

Over his near fifty years collecting and studying minerals, Mr. Dunning has authored or co-authored 50 papers pertaining to mineralogical subjects, eight of which involved descriptions of new minerals. His main interests have been in Ba-silicates and Hg-bearing minerals. He has been actively involved in mineral classification and even developed a system for their classification using an alphanumeric nomenclature. He also has a keen interest in ore microscopy and used those techniques in metallography to study several mineral localities containing sulfides and sulfosalts.

Three of the most recent studies conducted by Mr. Dunning and co-authors include: 1) The Clear Creek mine (mercury), San Benito County, California, 2) Barium Silicate Mineralogy of the Western Margin, North American Continent:  Geology, Origin, Paragenesis and Mineral distribution from Baja California Norte, Mexico to Alaska and 3) Geology, Mining History, Mineralogy, and Paragenesis of the McDermitt Caldera Complex, Humboldt County, Nevada, and Malheus County, Oregon.  Mr. Dunning has served as President (1988-89) and Treasurer of the Bay Area Mineralogists (1990-1994) and currently is the awards chairperson for the mineral group. He is currently working on a paper describing the paragenesis of mercury mineral occupancy of closed cavities at the McDermitt mine, Humboldt County, Nevada.

The Mineralogical Association of Canada makes the biannual award of the Pinch medal, named after Mr. William W. Pinch, an outstanding amateur mineralogist and mineral collector from Rochester, NY, to recognize a member of the Collecting Community who has contributed to the discipline of mineralogy in an outstanding, sustained manner.

This year, the 2019 Pinch medal is awarded to Mr. Gail E. Dunning of Sunnyvale, CA, a retired metallurgist from GE, who has dedicated an enormous amount of his ‘free’ time to detailed studies of unusual primary and secondary minerals from the California and Nevada in the US and northern Mexico. Mr. Dunning has been involved in the discovery of 8 new minerals to date (with potentially more to follow) and in 2019, the new mercury mineral, gaildunningite from the Clear Creek mine, CA, was named in his honour.

The Mineralogical Association of Canada is very proud to recognize the long-term dedication and efforts of Mr. Gail E. Dunning to the science of mineralogy by awarding him the 2019 Pinch medal.

I was quite surprised to receive a very nice e-mail from Lászlό Horváth proposing me as a 2019 candidate for the Pinch Medal awarded biannually by the Mineralogical Association of Canada to members of the amateur collecting and dealer community.  I had never considered myself worthy of such a covetous award for being a local mineral collector mainly interested in the discovery of new and rare minerals in California and Nevada.  I consider it an honor just to have discovered a new mineral and see it adequately described.

Unfortunately, I did not know Bill Pinch personally but I am familiar with his namesake mineral, pinchite, a mercury oxy chloride, found in the mercury deposits at Terlingua, Texas.  The study of mercury minerals is one of the most difficult subjects in the field of mineralogy and requires a lot of blood, sweat and tears to achieve meaningful results!

I am greatly honored and very pleased to accept the 2020 Pinch Medal and privileged to become a member of the distinguished ranks of previous Pinch medal recipients.  I know for a fact that there are many other deserving individuals within the mineral collecting community who are well deserving of this medal.  I truly thank the Mineralogical Association of Canada, the members of the Pinch Medal committee, and to those kind individuals who submitted and supported my nomination.

Although I would have sincerely liked to have attended this ceremony and meet many of my mineral friends, I cannot because of my obligations as a continuing caregiver for my wife, who has several major health issues, that prevents me from attending.

My initial interest in minerals began in 1955 with a course in geology at Hartnell College, Salinas, California while a chemistry major.  We were required to submit a personally collected and properly identified mineral collection at the end of the semester.  I was also inspired by my then long-time friend and collecting colleague, the late Joseph Fenimore (Fen) Cooper, Jr., whom I met in this class, in this endeavor.  After graduation from Hartnell, I continued my education in physical chemistry at the University of California (Berkeley), followed by employment in 1959 with the General Electric Company as a chemist and later as a senior metallurgical engineer for a 42 year career followed by my retirement in 2002.  At GE, within the materials testing laboratory which I supervised, I became proficient in the art of metallography, which easily branched into ore microscopy, a fascinating yet not appreciated aspect of mineralogy.  The world of opaque minerals under the microscope led to our study of several California and Nevada mineral occurrences rich in sulfides and sulfosalts, namely the troilite locality problem, the Spring Creek sulfide study, the Darwin sulfosalt study and the Outlaw mine sulfosalt study.

In 1960, Fen and I were privileged to have obtained permission from the owner, Mr. Fred Johnson, to explore at any time the Kalkar Quarry, Santa Cruz, California because of the unusual suite of sulfide and sulfosalt minerals, some containing tin, known from this small local limestone quarry.  On one of our collecting trips there in 1963, after my two year military service in the army (Entomology), we discovered a dark brown massive mineral embedded in massive fine-grained limestone half buried in brush and dirt.  Later that day, after using a short wave ultraviolet light on the sample, a bluish-white phase appeared which resembled scheelite.  I took a sample to work on Monday and had a qualitative spectrographic analysis performed.  Much to my surprise, the phase contained major barium, tin and silicon with minor titanium!  The only mineral we knew at that time with similar elements and fluorescence was benitoite and this quarry environment did not seem right for this mineral to occur when compared to the original type locality in San Benito County, California.  A sample was submitted to the California Division of Mines at San Francisco where a powder diffraction pattern proved that it had the benitoite pattern but was rich in tin.  Much to our delight, we had discovered the tin analogue of benitoite (we actually gave it the term “tin benitoite” for lack of a better name).  The mineral was eventually named pabstite after Dr. Adolf Pabst of the University of California, Berkeley by E.B Gross, J.E.N. Wainwright and B.W. Evans (Am. Min. V. 50, p. 1164).  Not to be left out of this great find, but the dark brown massive mineral associated with pabstite turned out to be the largest sample of titantaramellite ever found!  After several years of work at the quarry, we documented over 75 minerals from this small limestone quarry and published our results in The Mineralogical Record.

Aside from our mineral collecting adventures, my early interest in mineralogy was directed to the development of a classification system for the known minerals at that time, since Dana’s System of Mineralogy, Seventh Edition, did not contain a classification for the silicates.  This endeavor had several iterations over the years starting with 3 x 5 cards, then to IBM punch cards and finally to a personal computer.  This process of changes, additions and correction has taken a number of years, but well worth the effort.  I now have a usable classification for my collection based on an alpha nomenclature system that covers a total of 25 classes of minerals in Word documents and a corresponding Excel spreadsheet.  This classification system is updated on a regular basis when new minerals or crystal structure information are made available from the literature.

This mineral adventure was the beginning for over 50 years of collecting throughout several western states where we sought out rare and unusual minerals and documented our findings in a number of papers published in various journals.  During this rather long collecting history we were gifted by the encouragement of several professional mentors, namely, the late Richard C. Erd, Adolf Pabst, and Charles W. Chesterman.

Our adventures and misadventures over the years have been uniquely recorded by Fen Cooper in his 588 page monogram titled “Thank God, this is only a hobby” posted on the BAM website.

Aside from investigating the mineralogy of many western mining sites, our interest was mostly directed first to barium silicate mineralogy in California and second, and most recently, to mercury mineralogy, both in California and Nevada.  A two-part paper on the geology, mineralogy and paragenesis of barium silicates along the western margin of the North American Continent from Baja California, Mexico to Alaska, USA was a culmination of many years of effort on this subject with co-authors Robert E. Walstrom (New Mexico) and William Lechner (Toronto).  Our second endeavor by a BAM team of collectors composed of Ted Hadley, John Magnasco, Andrew Christy and Fen Cooper, focused on the mercury mineralogy and paragenesis of the small but locally famous Clear Creek mine, San Benito County, California, where a total of twenty one new mercury phases was discovered, the first nine by the late Ed Oyler, and the remaining by the BAM team.  After an ongoing study that lasted 24 years, my namesake, gaildunningite, was the first among the latter group.  Following this project we, without caution and foresight, adventured to better understand the mercury mineralogy and paragenesis of the McDermitt mercury mine, northern Nevada, the largest in the USA, where we discovered 13 new mercury phases in addition to the previously published phases, corderoite, kenhsuite and radtkeite. One of these new phases was identified as the first mercury carbide oxy chloride every found in Nature. In retrospect, I have never encountered a more obnoxious and hard rock in all the years of collecting than that from this mine!

My current project entails the description and paragenesis of mercury mineral occupancy of cavities at the McDermitt mine, Opalite Mining District, Humboldt County, Nevada.

Lastly, I am grateful for the help and encouragement of the professional community by Andrew Roberts, Frank Hawthorne, Mark Cooper, Andrew Christy and Anthony Kampf.  Without their professional help, many of the discoveries made by the collecting community would never have made it to the publication level.

Again, thank you very much for this special honor of the Pinch Medal.  I will cherish it as long as I am able to break a hard rock and look for something new within it!