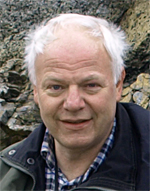 An electrical engineer by profession, Alf Olav Larsen is a self-taught mineralogist, who has been involved in the description of six new mineral species (gadolinite-Ce, chiavennite, tvedalite, grenmarite, heulandites-Ba, and eirikite) and has cooperated with many professional mineralogists and amateurs from several countries.

His main interest is the mineralogy of alkaline provinces, with focus on the Langesundsfjord nepheline syenite pegmatites (the Larvik Plutonic Complex).

An author or coauthor of over 75 publications in the scientific and popular literature on a great variety of topics related to mineralogy, he has recently published Langesundsfjord – History, geology, pegmatites, minerals. The mineral alflarsenite is named after him.

Alf Olav Larsen, of Stathelle, Norway, has been awarded the 2011 Pinch Medal of the Mineralogical Association of Canada for his immense and sustained contributions to mineralogy over several decades.

The Mineralogical Association of Canada instituted the Pinch Medal, awarded biannually since 2001, to recognize major and sustained contributions to the advancement of mineralogy by members of the collector dealer community.

This medal is named for William Wallace Pinch of Rochester, New York, in recognition of his enormous and selfless contributions to mineralogy.