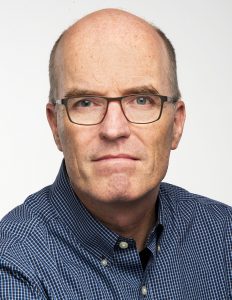 Thomas was born and educated in Germany. Studying geology at Gutenberg University in Mainz, he became very interested in volcanology and for his MSc thesis, worked with Georg Büchel on a geophysical investigation of Tertiary maar diatremes in the Eifel volcanic field. For his PhD (1987-1991), Thomas joined the research group of Volker Lorenz at Würzburg University and studied the diamondiferous Ellendale lamproites in Western Australia.

Attending the 5th International Kimberlite Conference in Araxá, Brazil, in 1991 and experiencing the unique community of academics and industry geologists in that field got him hooked on mantle, kimberlite and diamond research. A postdoctoral project on the Gross Brukkaros caldera in Namibia still kept Thomas largely in the field of volcanology. With a Marie Curie Fellowship of the European Union, he then joined Jeff Harris at the University of Glasgow in 1994, where he got involved in research on diamonds and their mineral inclusions.

From 1996-2001, Thomas was non-tenured faculty at Frankfurt University, where he worked together with Gerhard Brey on diamonds and Earth mantle rocks. In 1999 he obtained his venia legendi in mineralogy and petrology. In the same year he was presented with the Victor Moritz Goldschmidt Award of the German Mineralogical Society. Thomas joined the University of Alberta in 2001, where he is now professor and Canada Research Chair in Diamonds. Thomas’ research on diamonds initially focused on their inclusions and what they tell us about the origin of Archean lithospheric mantle and the composition of the transition zone and the lower mantle. Working with an incredible team of colleagues at the University of Alberta, he then became increasingly interested in the composition and speciation of mantle fluids and spearheaded the creation of the CFI-funded Canadian Centre for Isotopic Microanalysis (CCIM), with a multi-collector ion microprobe at its heart, enabling, among other things, in situ stable isotope studies of diamonds and mantle xenolith minerals.