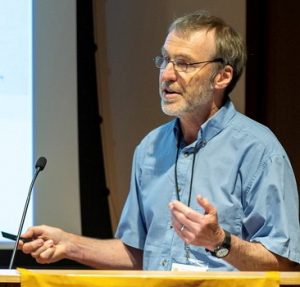 Simon Jackson is a scientific pioneer who has been at the forefront of mineralogical and geochemical research for his entire career, beginning with his seminal work on the development of laser ablation inductively coupled plasma mass spectrometry (LA-ICP-MS) in the early-1990s. Simon has led many of the major developments in LA-ICP-MS techniques that have revolutionized the quantitative micro-analysis of minerals. This includes development of new laser ablation systems, the first robust software for data processing (i.e., LAMTRACE), methods for quantitative calibration and uncertainty of LA-ICP-MS datasets, high-spatial resolution trace element mapping, and the development of geological reference materials through international collaboration. These advances have helped transform the trace-element analysis of minerals to the micron scale, within a spatial context, and have led to significant new applications in diverse fields, including mineralogy, metallurgy, geochronology, environmental geochemistry, archeology and ore system science. His impact on these diverse research fields have often gone beyond analytical method development and analysis, which has made him a sought after collaborator across government and academic research.

Many of Simon’s earliest papers now represent the seminal contributions in the field. For example, the calibration strategies for converting LA-ICP-MS signals to fully quantitative element concentrations developed by Simon and colleagues have endured rigorous scientific testing over the last several decades and remain the method of choice for fully quantitative micro-analysis. His 1992 paper in The Canadian Mineralogist (30, 1049-1064) describing some of these innovative procedures was immediately recognized as ground-breaking, and justifiably received the 1993 Hawley Medal. Simon has also made important contributions to the development of microanalytical standards – which form the foundation of all applied in situ analytical studies – and his research has been integral in the development of LA-ICP-MS analysis of zircon for U-Pb geochronology. His 2004 paper in Chemical Geology (211, 47-69), which has garnered over 3000 citations, was one of the first to document and compare the precision and accuracy of LA-ICP-MS measurements for U-Pb age of various zircon reference materials – a task of ongoing interest by numerous research teams today.

Simon is also a mentor for many young students and early career researchers through his positions in academia and government. To those that know him, these personal connections have had a lasting impact on their careers by instilling a sense of scientific experimentation and rigor. It is this combination of research quality and magnanimous personality that have contributed to Simon’s recognition as a leader across the Canadian and international research community, the sum of which makes him the pre-eminent choice for the 2020 Peacock medal.