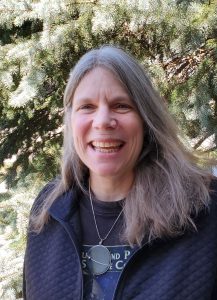 Dr. Roberta L. Flemming, a Professor in Earth Sciences and Director of the Powder and Micro-X-ray Diffraction Facility at Western University. She was born and raised in the Niagara Peninsula and graduated from Brock University (1985) with a B.Sc. in Geology and Chemistry. At Brock she discovered her love for Solid State Nuclear Magnetic Resonance spectroscopy (NMR) during her 4th year thesis with Dr. J. Stephen Hartman. She received her M.Sc. (1990) and Ph.D. (1997) in Geological Sciences from Queen’s University, studying under Dr. Ron Peterson, where she combined NMR spectroscopy with X-ray crystallography and high-temperature mineral synthesis, studying spinel group minerals. She held a Killam Post-Doctoral Fellowship at University of Alberta (1997-1999) with Dr. Robert Luth where she studied aluminous pyroxenes synthesized from high pressures.  She has been at Western University since 2000, where she has enjoyed research and teaching in mineralogy for over 20 years. She was awarded a CFI-funded Micro X-ray Diffractometer in 2002, which performs in situ XRD, and she put her first Kimberlite Indicator Minerals (KIMs) (garnets from Dr. Herb Helmsteadt) and her first meteorite (Southampton Pallasite) on the micro-XRD in 2003.

Roberta’s research program uses minerals as interpretive and predictive tools to reveal past and present processes on Earth and other planetary bodies including the moon and Mars. Her research program involves innovative applications of in situ X-ray diffraction and NMR spectroscopy, and allied methods such as EPMA and XRF, to study Earth and planetary materials to understand solar system evolution. She uses Solid State NMR and XRD to quantify minerals as recorders of temperature in the early solar system and terrestrial mantle rocks, by making systematic observations of mineral composition, crystal structure and cation distribution (order-disorder) for key mineral suites, to derive thermodynamic parameters and equilibration temperatures. She uses in situ XRD to correlate crystal structural parameters to chemical composition in minerals, including meteorites to aid classification (e.g. H, L, LL), and KIMs for application to diamond exploration. She is pioneering the development of in situ XRD to interpret and quantify minerals as recorders of crystal deformation due to tectonic deformation (strain) and meteorite impact (shock) in Earth and planetary materials. She has recently begun calibrating strain using experimentally shocked rock forming minerals, as well as evaluating strain at a smaller scale, using EBSD. She is also leading a multidisciplinary team of researchers, with funding from the Canadian Space Agency, to develop a “Miniaturized In-situ X-Ray Diffractometer for Mineralogical Characterization of Planetary Surfaces (ISXRD)” with a focus on Mars.

Her research has benefited greatly from working with many excellent collaborators at Western, across Canada, and internationally. She has supervised 37 B.Sc., 20 M.Sc. and 7 Ph.D. thesis students, and published over 70 research papers. She considers it a privilege to have been able to supervise and collaborate with so many outstanding students over the past two decades.

She is an enthusiastic teacher and mentor to students of all ages, and she is committed to public outreach. She was awarded Western’s Faculty of Science Outreach Award in 2020.  Last year she Co-chaired GAC-MAC 2021, hosted by Western in London, Ontario, and she co-organized the 14th Canadian Powder Diffraction Workshop-Berry School, also at Western.

Thank you to the Mineralogical Association of Canada, for sponsoring this medal, and for all they do to promote Mineralogy in Canada, and thank you to Heather Jamieson for nominating me. Now I’d like to go back to the beginning. I want to thank my mother, Norma, who collected minerals, and my father, David, who collected fossils. We lived on a farm in Niagara and they loved nature. We hiked a lot and also sailed a lot. On one sailing trip in Lake Superior my mother was collecting minerals using the North Shore of Lake Superior Road Guide to Minerals – from our sailboat! At Cape Gargantua we went looking for zeolites along the shore because they were located at a road stop nearby according to the book – and I found the first one! This kick-started my mineral collection, in grade 7. I also want to thank my twin sister, Cecily, for being right there with me as we explored the natural world together. She became a microbiologist.

When I got to Brock University as an undergraduate, I knew I wanted to be a geologist, along with my lifelong friend Heather Plint, but I also liked chemistry so I took the combined program in Geology and Chemistry. I have Steve Hartman to thank for helping me make the direct connection between these two subjects in 3rd year inorganic chemistry. When he got to Silicon on the Periodic Table, he started making silicate minerals on the blackboard. He linked Silicon tetrahedra by their four corners to make quartz, and substituted Aluminum for Silicon, and balanced it using a Sodium cation, which made albite. It was a ‘Eureka’ moment! That was my first taste of crystallography!

I did my 4th year thesis with Steve Hartman and his specialty was solid state NMR spectroscopy. Thus began my lifelong passion for elucidating cation ordering by NMR. Steve Hartman’s Master’s student at that time was Barbara Sherriff. She’s the one who taught me how to collect my early NMR data during our trips to Colin Fyfe’s NMR Center at Guelph. That was the beginning of our lifelong friendship and her lifelong mentorship. Barbara was one step ahead of me throughout our careers and she has always provided me with guidance and unconditional support.

I did my M.Sc. and Ph.D. in the Geological Sciences and Geological Engineering Department at Queen’s, supervised by Ron Peterson, and it was an excellent place to do science. It was a fantastic group of professors and students. I particularly want to thank Peter Roeder for generously providing his lab and his wisdom for my spinel synthesis, and Brian Hunter, my co-supervisor in Chemistry, for his NMR expertise and his lab for synthesis of 17O-doped compounds. I also want to thank R.D. Heyding, the crystallographer in Chemistry, for the many hours I spent using his Guinier de Wolff camera to check my run products, and drinking tea in his lab-office with him and Brian. I especially want to thank Heather Jamieson, who was my mentor in geochemistry and my mentor in life.  She was the only female professor in Geology when I got to Queen’s. We had kids the same age and she was a role model for juggling the work-life balance, even before it was a catch phrase. Our kids played together and we even babysat for each other on occasion. Heather was always there for me, and Heather and John’s home was always open to me when I would visit Kingston after graduating. When I was back at Queen’s for a year in 1999, I got to know Herb Helmstaedt. Herb has been a mentor for me in the kimberlite realm.

I’m thankful for my Killam PDF experience at University of Alberta, in Bob Luth’s high-pressure laboratory. It was there that I synthesized my first high-pressure silicates, which started me on the path of measuring cation ordering in silicate minerals by NMR.

As a professor at Western since 2000, I was able to continue using everything I learned from my previous experiences, but I had to pick up new skills as well, like curating the Dana mineral collection and directing an X-ray diffraction lab, both of which I took over from John Starkey, when he retired.  I’ve learned a lot from my colleagues at Western, who are too many to name. We are a collegial group, and our students benefit from training in each other’s labs.

I’ve had the privilege of working with many amazing students, both my own students, and my colleagues students, through interactions in the XRD lab. These bright young inquiring minds, so enthusiastic to learn, are a constant inspiration to me.

There is one colleague that I want to especially thank today, with whom I have collaborated and published more than any other, and it’s Phil McCausland. Phil’s curiosity and knowledge of the stars, the solar system, the Earth, deep time, and the rheological properties of rocks and minerals are impressive. He has a generous spirit. He is ever curious and creative, and a broad thinker. He helps me see the forest when I get stuck in the trees. Thank you Phil for almost two decades of living and working together!

I would be remiss if I didn’t say something about Martin A. Peacock, after whom this award is named. He was a mineralogy professor at U of T from 1937 to 1950, who was deemed by some to be the ‘Father of Modern Mineralogy in Canada’. He inspired students. Two of his Ph.D. students, Edward W Nuffield and Robert B. Ferguson, wrote eloquently about him in 2005, “We were privileged to transmit to future generations of mineralogical students, the enthusiasm for research and dedication to quality that he instilled in us. Most of us can look back to only a few teachers that made an important impression on us. Peacock stood well out beyond and above any university teacher, as a supervisor of our Ph.D. programs and as a fellow researcher. We realized that the value of what he taught lay less in mineralogy than in his portrayal of the scientist. He had a scrupulous regard for honesty and accuracy in research and the results were transcribed in masterful English, characterized by clarity and brevity”.

One of his Ph.D. students was Leonard G. Berry, whose office my Ph.D. supervisor, Ron Peterson, took over when he arrived at Queen’s. So that makes me Martin Peacock’s academic great-granddaughter of sorts!

I am honoured and humbled to accept the 2022 Peacock Medal, and join a prestigious group of colleagues, some of whom are in this room. I hope I can continue to live up to these standards and pass them on to my students.

* A musical composition called “Intermezzo” was shared by Peacock’s daughter, Nancy Peacock, in 2012 and played by Robert Lindey at the First Unitarian Universalist Church of Winnipeg on May 12, 2013. It was performed at the MAC luncheon in Winnipeg when the Peacock Medal was presented that year.