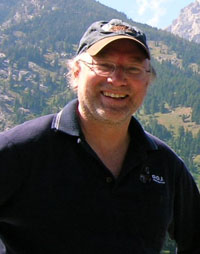 Kelly Russell received his BSc (Hons., 1976) degree in Earth sciences from the University of Manitoba where he was mentored by Rand Harrison, Lorne Ayres, Bill Brisbin, and Bob Ferguson. Prior to graduate school, he worked at the Manitoba Geological Survey where he honed his field skills under the tutelage of Ric Syme, Jon Scoates, and Joseph Macek. He then moved to the University of Calgary where he completed an MSc degree under the supervision of Ed Ghent (Petrogenesis of the Thompson Nickel Belt Gneisses, 1980) and a PhD with Jim Nicholls (Petrology of Diamond Craters, Oregon, 1984). After graduation he accepted a position at the University of British Columbia in the Department of Earth & Ocean Sciences. There he has taught courses in petrology, volcanology, geochemistry, and field mapping. His research interests are in the physical chemistry of volcanic processes related to the formation, transport, and eruption of magmas. His approach combines field study and computational modeling, and recently it includes high-temperature experimental studies of magma rheology. His research has been published in140 publications, reports, and maps, of which more than 80 are international peer-reviewed journal articles. Much of the success in his laboratory derives from a steady stream of excellent, highly motivated graduate students, most of whom are currently employed in industry, government, and academia.