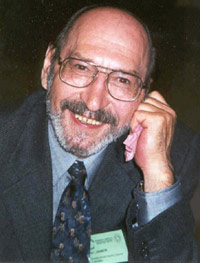 After receiving his Bachelor’s and Master’s degrees in geology from the University of British Columbia , John Jambor joined the Geological Survey of Canada in Ottawa in 1960, initially in the Petrological Sciences Division and later in the Economic Geology Division. During this period, he received his Ph.D. from Carleton University in 1966. In 1975, he transferred to CANMET, and upon completion of his GSC work on British Columbia porphyry-copper deposits, he directed the focus of his mineralogical studies to improving the processing of the massive sulfide ores of New Brunswick. John’s life-long affair with innocuous-appearing supergene minerals dates back to his bachelor’s thesis, when he discovered that high Ag values and poor recoveries from an oxidized fault zone in a mine at Galena Hill, Yukon, were traceable to the presence of argentian plumbojarosite. In the early 1980s, when acid drainage from mine wastes was gaining prominence as environmental and economic liabilities for the metal-mining industry, his familitary with oxidation processes led to collaborative and productive studies with geochemists who were investigating the generation and attenuation of acid drainage. Late in 1993, John returned to his roots in the Vancouver area, continuing his work in environmental mineralogy as Adjunct Professor at the University of Waterloo and at the University of British Columbia, and as the principal of Leslie Research and Consulting. He has been the recipient of several national and international awards including, from MAC, the Hawley Award (1970), the Queen’s Silver Jubilee Medal (1977) and the Berry Medal (1991). He has been an Honorary Life Member of MAC since 1982.

The Mineralogical Association of Canada awards its Past-Presidents’ Medal to scientists who have made significant contributions to the mineralogical sciences during their career. John Jambor, the medallist for 2002, has a long and wide-ranging career covering all aspects of the Earth sciences. He began his career as a mineralogist in the Geological Survey of Canada in 1960, and as economic geologist in 1972, then at CANMET as a mineralogist from 1975 to 1993, at which time he resigned to pursue a career of consultant and researcher (adjunct professor at the University of Waterloo and later at the University of British Columbia).

Dr. Jambor has published widely, making important contributions in the fields of mineralogy, petrology, crystallography, and mineral deposits (134 refereed publications and 123 other publications). The mineralogical contributions include the characterization of numerous new minerals, the mineralogy of several mineral deposits, characterization of jarosites and sulfosalts. Contributions in applied mineralogy have ranged from metallurgical to acid mine drainage and environmental mineralogy. He has made contributions to a wide range of ore deposits, including Ag-Pb-Zn at Keno Hill (Yukon), Ag-Co at Cobalt (Ontario), porphyry copper (British Columbia), base metal (New Brunswick), massive sulfide in the Buchans area (Newfoundland), and REE deposits (NWT, Labrador-Quebec).

Dr. Jambor also contributed to the earth sciences through editorial duties, of which the most significant are Scientific Editor of The Canadian Mineralogist (1971-1975); Co-Editor, The Canadian Mineralogist (1975-1977); New Minerals Editor, American Mineralogist (1989-present); Consulting Editor for Exploration and Mining Geology (1991-1999). Dr. Jambor has also been editor or co-editor of seven special issues, short courses and related books, as well as series editor for five MAC short courses. In recognition, he has been awarded the L.G. Berry Medal (MAC), Honorary Life Membership (MAC), and the Julian Boldy Memorial Award (CIM Geological Society). Dr. Jambor’s interests included environmental mineralogy when environmental mineralogy was not even named as a mineralogical science. He is using this expertise to organize, with David Blowes and Ian Ritchie, a forthcoming MAC short course, on the theme Environmental Geochemistry and Mineralogy, which will be presented at the GAC-MAC meeting in Vancouver in 2003.

It gives me great pleasure to present the Past Presidents’ Medal of the Mineralogical Association of Canada to John Leslie Jambor.

Response
For many in science, whether it be Earth Sciences or other, the chosen field has been a topic of fascination since the individual’s youth. Although I was born in the famous mining town of Noranda, Quebec, our family moved to Vancouver at a time when my lifespan had barely reached double digits, and it wasn’t until my first year at UBC that there is the recollection of hearing the term ‘geology’. The introduction was accidental, and came about after accepting a ride from a fellow student, the floor of whose car was strewn with hand specimens of various rocks. The response to my inevitable question led me to think that geology might be an interesting pursuit, but it wasn’t until the following year, after having completed the introductory geology course, that the decision to become a geologist was made.

My career has been blessed by a series of similarly happy accidents. Successive summers as a student had been spent mapping in the Yukon, the Coast Mountains of British Columbia, the Northwest Territories, and in doing stratigraphy and well-sitting in Alberta, and the decision was that petroleum geology was to be my chosen profession. Upon receiving my M.Sc. from UBC, however, employment prospects had changed, and the first ‘real’ job, a permanent position as it was called, was in a laboratory at the Geological Survey of Canada in Ottawa. That was a period in which the GSC was in full bloom, when science was viewed so favorably that management fought, successfully, to have the term Research Scientist installed as a job classification. Although that situation changed over the years, not only at the GSC but in similar organizations worldwide, the personal interest in scientific work, whether directed to pure or applied objectives, has not waned. When I joined the GSC, it was with the intention of staying for about two years. Opportunities to move elsewhere eventually arrived, but it took little introspection to reach the conclusion that nothing could be more satisfying than what I was already doing. Consequently, the stay at the GSC, and a roughly equal period at CANMET (the former Mines Branch), spanned more than 30 years.

Through such a lengthy career there are inevitably many individuals who have had a strong influence on the directions that were taken, and I hope to be forgiven for restricting mention to only a few who have influenced or shaped that direction since my return to Vancouver in 1993. Much of my work over the past decade has been focused on environmental mineralogy, and much of that has been the result of collaborations with David Blowes and his former students from the University of Waterloo. David is a geochemist, but he long ago recognized the benefits and constraining effects of integrating mineralogical and geochemical data for interpreting the geochemical behavior of weathering mine wastes. An ardent champion of mineralogy as applied to environmental geochemistry, he was the chief organizer of the 1994 MAC short course on Environmental Geochemistry of Sulfide Mine-Wastes, and we co-edited the resulting short-course volume. John Dutrizac of CANMET has continued to support and collaborate on the research into the mineralogical aspects that govern the results obtained from the tests that are currently utilized to predict whether wastes will be acid-generating. Louis Cabri was instrumental in providing the opportunity to participate in the IMA-COM-MAC short courses on Modern Approaches to Ore and Environmental Mineralogy, which were subsequently published as MAC Short-Course Volume 27. My collaboration at UBC has been mainly with Lee Groat and Mati Raudsepp. Although how that came about has passed detailed recollection, I know that I am grateful to Lee for his gentle but persistent prodding that the connection be made.

To be the recipient of the MAC Past Presidents’ Medal is a great honor, and I am grateful to those who supported the nomination, and to those who accepted it. Two things are necessary for one to receive such an award. First, it is necessary to have a resume that is deemed to be appropriate, and there are many candidates who would qualify in that regard. The second requirement, which is not of lesser importance, is that the candidate be nominated. That means an individual or group must be willing to make the effort and take the time to prepare the required documentation, with the prospects of a return on that investment limited to possible self-satisfaction and, of course, the undying gratitude of a successful nominee. When Past President Jim Nicholls phoned to say that I was to be the 2002 recipient, he mentioned that Louis Cabri had been responsible for the nomination. To have had that done by a former co-worker, who is also a past recipient of the award, is truly overwhelming. I thank all who were involved, and especially my patient and helpful wife Lynne, whose assistance has been instrumental in bringing to fruition much of what has been accomplished.”