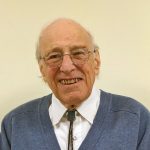 Dr. Morse was born in Hanover (New Hampshire, USA) where his father was a professor of English at Dartmouth College. He attended Dartmouth, majoring in geology, and later published a book and a paper with two of his professors.

In 1949, he was field assistant in archaeology on the oceanographic 100 ft schooner Blue
Dolphin in Newfoundland and Labrador (both Canada), and pursued fjord oceanography on the Labrador coast on that ship during the years of 1951 and 1952.

After serving in the US Army in Germany, he returned to Labrador in fall 1954 where, using small boats, he determined the maximum thermal regime in Hebron Fjord and Nain Bay.

He enrolled at McGill University (Québec, Canada) and received an MS degree for a mineralogical study on the Standing Pond Amphibolite in Vermont (USA) and New Hampshire. He was then hired by British Newfoundland Exploration Ltd to study what turned out to be the Kiglapait Layered Intrusion in Labrador. He also studied ice at the US Army Cold Regions Research and Engineering Laboratory in Hanover.

Dr. Morse joined the geology faculty at Franklin and Marshall College (Pennsylvania, USA) and, after nine years, moved to the University of Massachusetts, where he remains as Research Professor of Geosciences.

For ten years (1971–1981), Dr. Morse, along with colleagues from Cornell and Syracuse Universities (both in New York, USA), ran the Nain Anorthosite Project (supported by the National Science Foundation) from a newly built research vessel, the Pitsuilak. He conducted experimental studies at the Carnegie Institution of Washington (USA) and, later, worked with Professor John Brady at Smith College (Massachusetts, USA).

In 1957, at the Grenfell Mission Hospital in North West River (Labrador) he met a young lady named Dorothy from Massachusetts: he eventually caught up with her and married her. Stearns and Dorothy had three daughters together, all of whom served as field assistants in Labrador for many years, both in the field and onboard ship.