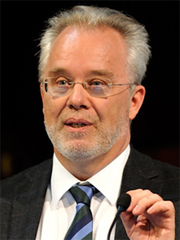 Born in 1958 in Corner Brook, Nfld., Canada, Don Dingwell received his B.Sc. (1980) in Geology/Geophysics from the Memorial University of Newfoundland and his Ph.D. in Geology at the University of Alberta (1984). Next followed two years as a Carnegie Research Fellow at the Geophysical Laboratory of the Carnegie Institution of Washington and one on the Faculty of the University of Toronto. In 1987 he was recruited to Germany as assistant to the director of a newly-founded research institute in Bayreuth. There he obtained his Venia Legendi in Geochemistry in 1992. In 2000 he was called to the Chair in Mineralogy and Petrology at the Ludwig Maximilian University of Munich. There he founded the Department of Earth and Environmental Sciences of which he is currently Director.

Dingwell’s principal research interest is the physico-chemical description of molten rocks and their impact on volcanic systems. He has contributed largely to the development of the new and expanding field of experimental volcanology. He has published ca. 350 papers whose impact is reflected in ca. 10,000 citations.

He has led several major national and European research projects and initiatives in the solid earth sciences. He is a fellow of the American Geophysical Union, the Mineralogical Society of America, the Geological Association of Canada and an honorary fellow of the Societa di Mineralogia e Petrologia Italiana. He is an elected member of the Royal Society of Canada (Canada’s national academy), the Academia Europaea, (Europe’s academy of science, arts and letters) and ACATECH (the German national academy of science and technology). Dingwell has had honorary degrees of Doctor of Science bestowed upon him by the University of Alberta and University College London.

He has held office in numerous national and international societies, recently serving as President of the European Geoscience Union. He currently chairs the section of Earth and Cosmic Sciences of the Academia Europaea and serves on its Board, is a member of the European Academies Sciences Advisory Council (EASAC) and is the president-elect of the global volcanology organization, International Association of Volcanology and Chemistry of the Earth’s Interior (IAVCEI).

The president of Germany has bestowed upon him the Order of Merit (Bundesverdienstkreuz) of the Federal Republic of Germany.

Don has expanded the sphere of mineralogy by dissecting through the P, T and X axes that embody the fundamentals of magma.His description of magma properties (viscosity, density, volatile solubility) has bridged the gap between  equilibrium and highly disequilibrium systems, ranging from magmas storage in the crust, to flow in conduits, eruption and interaction with the lithosphere, hydrosphere, atmosphere and what is impressive is Don s capacity for truly creative experimentation that addresses seminal issues. It is what makes him an exceptional scientist.From his elegant work on the relaxation of magmas, Don set out to demonstrate the relationships between the structure and viscosity of silicate liquids and the time dependence of the glass transition  a concept at the heart of volcanology, today.With the premise that a simple view of silicate liquids held the information to explain mass transport in the Earth and volcanic activity, Don took on a vast rheological campaign to describe the wealth of liquid geodiversity, creating the field of experimental volcanology.Over the last decades he has, in conjunction with his postdoctoral fellows and students, published a series of papers that have moved this sub-discipline to the forefront of mineralogy and volcanology.Don’s success in his research lies in his genuine love and fascination for science. The path he has created during his career has moved far beyond volcanology by contributing to the fields of geochemistry, petrology, earthquake physics, geobiology and material science (with implications in geo-engineering).Besides his duty of professor as the Chair of Mineralogy, Petrology and Geochemistry at the Ludwig-Maximilians University of Munich, Don has served the scientific community by acting as President of the EGU and more recently, as Secretary General of the European Research Council.In his many endeavours around the World, Don has voiced (directly and indirectly) his Canadian mineralogical heritage, offering the view that the interdisciplinary requirements of science, and equally of any administration and government, relies on the alliance of individuals holding diverse backgrounds and beliefs. His political involvement in Europe has profoundly contributed to science and engineering worldwide.In summary, Don Dingwell is exactly the type of geoscientist that the Peacock Medal is designed for, a person who has contributed to the very front of their science, nationally and internationally, who has had impact on their scientific field, and who will continue to bring honour to the Mineralogical Association of Canada for many decades to come.

By: Yan Lavellee and Kelly Russell

Response
“I am deeply honoured to be able to join you today to celebrate what I see as a body of research in the mineralogical sciences that I think we can safely say – no one saw coming. For my part in all that I have been simply privileged to have been in the right place at the right time.

What a wonderful array of experiences were handed to me by this country. Of course that also involved ‘goin’ down the road’. That road led through my school years with wonderful high school physics and chemistry teachers, and especially my undergraduate migration from physics to geophysics and geology, and from my surprise move of going out to Alberta for my doctoral studies and the adventures and impressions gained there. What a fascinating 1 year in Toronto juggling research, teaching and administration at U of T at the tender age of 27. The sky was the limit – as is so breathtakingly believable – on a Spring day in this grand country.

To Bill Iams, Hugh Miller, Dave Strong, Chris Scarfe and many others thank you. To those talent spotters who help us all along the way, to Hat Yoder, Fritz Seifert, Jeff Fawcett, and many others – thank you. To my former and present colleagues at Munich – thank you. To that army of talented postdocs and students, to Yan Lavallée and Jackie Kendrick, both here today, and two of the boldest scientists I know, thank you. To Kelly Russell who just keeps on going, continuing to demonstrate the power of sage wisdom and experience in innovative thinking, thank you.

The first time I was approached to go to Germany I declined out of something like a sense of duty and gratitude. The second time I buckled. And so I traded in an institution dripping with prestige and history to arrive at one with converted wooden barracks and heating that took two days to react. I traded in my professorship for something formally less. But it had something else, the opportunity to design, build, operate and innovate on a scale that was rare in this country in the mid-1980s…. and of course I decided to work hard to make everyone understand my decision.

When I arrived in Germany I had to retread my understanding of what went for  mineralogical sciences over there. I met so many professors who joyously spent all their careers in experimental laboratories that I started to feel quite at home. I learned that mineralogical research serves many masters.

To no surprise, amongst the steady flow of those who have turned up in Bavaria over the past quarter century with great and grand ideas for experiments were a very considerable number of Canadians. Today, you will find them across this country and across the globe, as it should be. Without their constant fertilisation of new ideas and new ambitions, much of the research I have been involved with would have been unthinkable or undo-able. What a pleasure it has been to work with them.

Mineralogy – this marvelous world of geomaterials and geopocesses – based with its great and long traditions of experimental science, has given birth to many successive disciplines. Its skills and reasoning lie behind the growth of analytical and inorganic chemistry, of glass and ceramics science, and of modern materials science, who knows what is next?

The message must be – keep it broad – hesitate to exclude things from mineralogy, hasten to include them. Make sure that mineralogy remains true to its traditions as the centuries-old cauldron of new concoctions for the good of geosciences and our understanding of the Earth and its neighbours as well as for disciplines beyond.

I would be remiss today to exclude some the lessons learned from the other efforts that have occupied some of my time in the past decade…the European Geoscience Union, the European Research Council and the now the International Association of Volcanology and Chemistry of the Earth’s Interior…

From the EGU, a thriving organization born but a decade ago, I learned how important it is that the debate on the geoscientific themes so vital to all of us must always be accommodated and fostered within our learned societies where everyone gets a seat at the ‘big table’ and even diametrically opposed proponents never allow the dialogue to cease.

From the European Research Council I learned that the Geosciences, with their basket of  problems and possibilities for our future grow in relevance every day. I was also constantly reminded that our standards of research, of graduate education and of publication and dissemination belong to the best. By looking at our sister disciplines we can however learn to do far, far more to pave the way for our inevitable and essential contributions to the future. I also learned the critical value of the ‘freedom’ of research as a goal in itself, and how it enables serendipity – the source of some of our greatest advances.  Prepare for the Unexpected.

With the imminent responsibilities for the world’s volcanological Association a new blend of pure and applied research and the stewardship of the implications of that work for a vast expanse of disciplines is likely to be the constant reminder of the central role of geosciences in all of our lives that it should be.

It is safe to say that there is nothing so special as a sign of recognition in the homeland. That is a truth that is plainly evident to me today. It has been a long time now since I have resided in Canada, 28 years, half of my life. But the constant reminders of ones roots are never very far away as one is continually reminded of when confronted with comments on ones Canadian style or language, or even, as recently happened to me in Munich ‘hey, is that guy up there from Newfoundland?’

To my long departed travelling companions of Valleyfield, Port Aux Basques and Cornerbrook, welcome to Canada, and thanks for packing my bags for the trip at a very early age.

My greatest of thanks go to my son, and my wife, who are both tremendous supports to me, and who are great supports to each other, on those days when I venture forth.

So to this great and enduring Mineralogical Association of Canada, with a future even greater than its past, I say, thank you. As in the past also in the future – you can always count on me.”