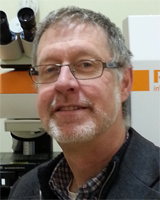 Don R. Baker was born in southern Illinois. When he was 11 he learned the story of Volcan Paracutin and fell in love with geology and the idea of a volcano growing in nearby corn fields. Don received his AB in geophysical sciences in 1979 from the University of Chicago, where he did research with A. T. Anderson Jr. and P. J. Wyllie. At the Pennsylvania State University he experimentally investigated island arc petrogenesis under David Eggler and received his PhD in geochemistry and mineralogy in 1985. After working at the Smithsonian for one year with Bill Melson investigating plagioclase zoning in Mt. St. Helens dacites, Don moved on to a second postdoc, with Bruce Watson at Rensselaer Polytechnic Institute. There he applied kinetics to the study of diffusion in silicate melts and its influence on the rates of igneous processes. He took up a faculty position at McGill in 1990. Since that time he has been using high-temperature geochemistry to study the equilibrium and kinetic processes responsible for the origin and evolution of igneous rocks and their minerals with his excellent students and collaborators. He has sat on the Mineralogical Association of Canada council, is an associate editor of American Mineralogist, and is currently the secretary of the VGP section of AGU.

The Peacock Medal, formerly the Past-Presidents’ Medal, is awarded to a scientist who has made outstanding contributions to the mineral sciences in Canada. The recipient of the 2014 Peacock Medal is Professor Don Baker of the Department of Earth and Planetary Sciences at McGill University.

Dr Baker is one of the leading experimental igneous petrologists in the world, and has substantially advanced science in his field through the publication of 90 refereed journal articles and other publications that cumulatively have been cited over 2200 times.

Dr Baker first attracted the attention of the igneous petrology community in the 1980s with a series of highly cited experimental studies that investigated the effects of pressure, composition and volatiles on the liquid lines of descent of magmas of mafic to intermediate bulk compositions. In the earliest of these studies, which focused on the volcanic arc environment, he provided the first robust experimental data bearing on the origin and evolution of high alumina basalts at elevated pressures, and showed, contrary to the view prevailing at the time, that these rocks are not necessarily low pressure derivatives of tholeitic magmas. Instead, some may be the products of fractionation of more mafic magmas at substantially higher pressure and, in turn, could have fractionated at lower pressure to form the andesitic lavas, which dominate this environment. In a subsequent paper, he expanded on this work by showing the important role that water plays in determining the path of magma evolution in these systems. Specifically, he demonstrated that, under anhydrous conditions, thermal divides preclude the formation of alkali basalts from tholeiites and andesites from basalts, whereas the presence of small amounts of H2O removes these divides and permits the proposed evolutionary paths. Continuing with this theme, but focusing on the continental rift environment, Don tackled another conventional wisdom, namely that the nepheline-normative trachytes and phonolites, and peralkaline rhyolites, characteristic of this environment, are the products of the fractional crystallization of primitive alkali basalts at mantle depths. In a highly cited paper, he showed, instead, that the genesis of these magmas is better explained by fractionation at shallow depth, where Fe-Ti oxide crystallization is able to drive the alkali basalt magma to high silica concentrations and produce silicic peralkaline magmas.

After working with conventional equilibrium magmatic processes, Dr Baker moved his attention in the late 1980’s to non-equilibrium processes, and particularly that of diffusion, understanding of which is essential to interpreting processes such as magma mixing or assimilation. This new direction soon led to several notable successes; including the first experimental demonstration that homogenization of isotopes by diffusion is decoupled from chemical homogenization. This paper was followed by a series of pioneering papers in the early 1990s that elegantly elucidated the role of halogens and water in controlling chemical interdiffusion, showing, for example, that whereas fluorine decreases the activation energy of diffusion, chlorine actually increases it. These papers are the starting point for the work that is currently going on in this active field of research. Recently, Dr Baker has extended his studies of diffusion by combining them with studies of bubble growth in both experimental and natural systems and with numerical models to investigate the effects of diffusion on the compositions of bubbles. This work, impacting as it does on the chemical changes accompanying the exsolution of aqueous fluids from magmas, will find applications in fields as diverse as active volcanology and porphyry/epithermal ore genesis.

Although, as noted above much of his recent research has been concerned with non-equilibrium magmatic processes, Dr Baker has continued to make major contributions to our understanding of equilibrium magmatic processes. This work has focused recently on sulphide silicate equilibria, for which he and his students have produced what may be arguably considered the best empirical model currently available. Finally, we would be remiss to not recognize Dr Baker’s work in statistical physics, which includes titles such as  The continuum percolation threshold for interpenetrating squares and cubes published in Physical Review E, and  Nonlinearlity and multifractality of climate change in the past 420,000 years published in Geophysical Research Letters. These publications speak volumes to the breadth of Dr Baker’s interests and his ability to impact not only the relatively large field of igneous petrology and volcanology but also fields well beyond it.

In summary, Don Baker has made seminal contributions to our science and is a very worthy recipient of the 2014 Peacock Medal of the Mineralogical Association of Canada.

I wish to express my heartfelt thanks to Mr. President, members of the Peacock Medal committee, and Willy Jones, who nominated me. I was surprised and pleased when I learned that I had won this award, but immediately wondered if they were confusing me with some other Don Baker (it has happened before). They weren’t, I had won the medal. However, I did not win this medal alone; this medal was also won by my former professors, my colleagues from my days as an undergraduate until now and my students; I am proud to have worked with them and learned much from them during the past 38 years. I wish to thank all of them for their excellent work that brought me to this point in my career. I accept this medal in their honor for the significant role they played in my research and my career.

I thank my parents and my brother and sister who taught me the love of learning new things about the universe around us, collecting almost anything we found, and the joy of building and fixing things (cars, bikes, radios, TVs). They taught me not to be content with the status quo and to always challenge myself to do new things. My interest in geology was focused on volcanoes at early age. I remember reading about them in an old geology book that lead to a struggle to understand eugeosynclines and miogeosynclines, however once I learned about plate tectonics I immediately abandoned that struggle and learned instead the relationships between volcanism and plate tectonics. Due to a stroke of luck that landed me a summer job in Peter Wyllie’s lab at the University of Chicago, I was able to study experimentally the melting of subducted oceanic crust as an undergraduate. For my Ph.D. with David Eggler at Penn State I continued my studies on island arc petrogenesis by concentrating on studying the evolution of hydrous basaltic melts at crustal pressures.

During my years of studying I have learned many new and exciting concepts and watched as high-temperature geochemistry and igneous petrology moved from a  classical era dominated by Bowen’s reaction series to the modern age where numerous petrogenetic processes are now believed to play fundamental roles in the origin and evolution of igneous rocks. New instruments brought new discoveries, and we were able to start measuring the duration of igneous processes, not merely the radiometric age of a rock. This is an exciting time to be a high-temperature geochemist, especially if, like me, you study processes and try to find quantitative constraints on their import.

I am very appreciative of receiving the Peacock award because it reflects MAC’s acknowledgment of the continuing importance of laboratory experiments and computer simulations in the study of high-temperature geochemistry and igneous petrology. Although field geology is the foundation of our science, we cannot watch igneous processes in situ, experiments and computer simulations are necessary to understand igneous petrogenesis. In combination, these studies will improve our abilities to understand better how the Earth works, to find the ore metals our society needs to bring all people to a decent standard of living, and to predict volcanic eruptions and mitigate their hazards. There is so much to learn and to understand so many experiments and simulations to do.

I am very privileged to have become a professor of geochemistry at McGill and to win the Peacock Medal; it is a great honor to have my name listed with some of the worlds’  greats of  geochemomineralogy who were previous winners.

Thank you all very much.”