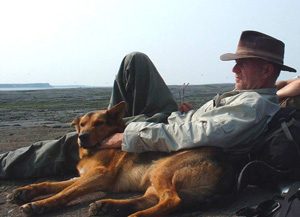 Don Francis was born in Montreal and grew up in the West Island where, as a Boy Scout, he developed a passion for the Canadian North reading tales of the early explorers. He completed an Honors BSc in geological sciences at McGill University in 1968 and went on for an MSc with Hugh Green at the University of British Columbia in 1971, followed by a PhD with Tom McGetchin at MIT. Don returned to McGill as a professor in 1974 and has remained there ever since. Don’s research uses chemistry to investigate the origin of mafic magmas in the Earth’s mantle. He and his students have studied magmatic suites spanning the history of the Earth in field-based projects in northern Quebec, Baffin Island, the NWT, northern British Columbia, and the Yukon. At McGill, Don was instrumental in the transformation of the Department of Geological Sciences into Earth and Planetary Sciences, and towards the end of his scientific career, he finds his interests increasingly drawn to the secular evolution of the Earth’s mantle and magmatism in the terrestrial planets in general.