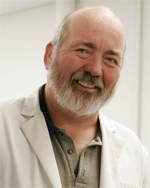 Brian Fryer was born in Sudbury and completed his Honours B.Sc. in geology in 1968 at McMaster while co-captaining the Marauder football team into their first, and only, Vanier Cup appearance. He then joined the ranks of Canadian students studying at MIT and completed his Ph.D. in 1971 on the age (with Pat Hurley) and geochemistry (with Fred Frey) of the Sokoman Iron Formation in Labrador. His academic career started in 1971 at the University of Western Ontario with a series of visiting professorships interspersed with a year in Brazil and research interests that expanded into Archean greenstone belts and their gold deposits. Brian moved to the Department of Earth Sciences at Memorial University in Newfoundland in 1977, where he was a founding member of the (LA) ICP MS group, initiated the development of the radiogenic isotope facilities, and became Head of the department in 1987. He moved to the University of Windsor as Dean of Science in 1993 before returning to research full-time in 1999. His research interests in the mineral sciences are broad but always include high-quality and often innovative analytical techniques. Most recently, they are focused on the development of femtosecond laser ablation applications with ICP MS and MC ICP MS in the Earth and environmental sciences.