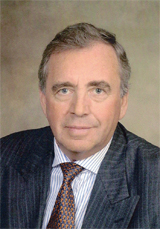 Felix V. Kaminsky graduated from the Lomonosov Moscow University in 1959 with an MSc degree in geology and from the Gubkin Moscow Oil Institute in 1966 with an MSc degree in geophysics. From 1959 to 1970, he worked as a field geologist and then as the head of a geologic field crew in Siberia, where he carried out geological mapping and exploration for diamonds. During this period he discovered and studied a new kimberlite field in the Ingili River basin. On the basis of the obtained data he received a PhD degree from the Russian Academy of Sciences in 1969. From 1970 to 1994, he worked at TsNIGRI, Moscow, as a chief research scientist in the diamond department. He found eleven new diamond localities, including non-kimberlitic diamonds in polar Siberia, Mongolia, Koryakia, Kamchatka, and Armenia. On this basis, he obtained a DSc degree in mineralogy and petrology from the Institute of Mineral Resources, Moscow, and published a monograph entitled Diamond Potential of Non-Kimberlitic Rocks.

In the 1980s he discovered the first diamonds in the Archangelsk area, which subsequently led to the discovery of the world-class Lomonosov diamond deposit. In 1991, he was elected as a Member of the Russian Academy of Earth Sciences and established the Institute of Diamonds. In 1994, he left Russia and created KM Diamond Exploration Ltd. in Vancouver, Canada. He has since consulted for numerous Canadian companies and prospected for diamond deposits in Canada, Brazil, Venezuela, Ghana, Mali, Mauritania, Madagascar, and Saudi Arabia. At the same time as exploring for diamond deposits, he continued to work as a research scientist. His main fields of interest are the petrology of kimberlites and the mineralogy of diamond. 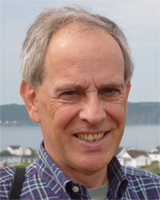 In 1994 Richard Wirth established the TEM laboratory at GFZ Potsdam, which he has continued to develop by incorporating modern technologies such as the focused ion beam. His main research areas are micro- and nanoinclusions in minerals, structure and behavior of grain boundaries, and meteorites. He was awarded the GFZ Research Award in 2003 and was granted the W. F. James Chair in Science at St. Francis Xavier University in Antigonish, Nova Scotia, Canada, in 2005. In 2009 he became a Fellow of the Mineralogical Society of America and in 2010 Fellow of the Geological Society of America. He was nominated as a distinguished lecturer of the Mineralogical Society of America for 2013-2014. 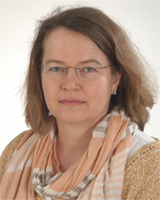 Anja Schreiber is the laboratory manager of the TEM sample preparation laboratory at GFZ Potsdam. She earned a degree as technician in chemistry at Schering AG (now Bayer AG) in Berlin. She began preparing foils for TEM use at GFZ Potsdam using the focused ion beam technique in 2008. Since that time she has produced approximately 3000 foils from different materials, such as silicates, carbonates, sulfides, metals, alloys, ceramics, diamonds, and fossils. In 2011 Anja Schreiber was awarded the GFZ Prize for Technicians.

Great science is more than a great idea: it is a combination of a hypothesis with excellence in sample preparation, data collection and interpretation of the results obtained. The paper chosen to receive the Hawley medal this year exemplifies these ideals.

Recent studies of mineral inclusions in diamond have provided us with unprecedented information about the mineralogy of the lower mantle, and the nature and role of fluids in the deep Earth. The study of Kaminsky, Wirth and Schreiber (2013) represents a significant advance in this field. The authors carefully used transmission electron microscopy, electron diffraction, analytical electron microscopy and other methods to document the associations, textures and compositions of micro- and nano-mineral inclusions in lower mantle diamond. Their results demonstrate that the diamond formed in a lower mantle, carbonatitic, carbonate-halide-phosphate-fluoride medium, which was enriched in rare earth elements and volatiles. Future studies will almost certainly focus further on the origin of this primary, deep-seated carbonatitic magma, and its significance in models for the accretion and differentiation of the Earth.

Unfortunately, due to previous commitments, both Felix and Richard were unable to attend this meeting. However, we are most fortunate to have Anja Screiber in attendance and she will accept the Hawley medal for 2013 on behalf of her co-authors.

On behalf of my co-authors Felix Kaminsky and Richard Wirth, which had no opportunity to participate in this ceremony, I would like to thank the Mineralogical Association of Canada for awarding us with the prestigious Hawley Medal.

In the last decade focused ion beam prepared samples from diamonds from all over the world have been studied with TEM. These FIB/TEM investigations have demonstrated that beside the micrometer-sized inclusions in diamond nanometer-sized inclusions exist. The nanophases included diamond represent the composition of the fluid or melt diamond has grown from.

However, studying diamonds with TEM always starts with sample preparation. Sometimes, tiny little inclusions might be visible under the optical microscope. Sometimes, TEM foils have to be cut from diamond from random locations in the hope to find some interesting inclusions in the TEM foil. If there are some visible inclusions inside the diamond the stone has to be polished using a diamond polishing wheel to get access to these inclusions with FIB milling. FIB can cut 15 micrometre deep only. After several polishing steps the inclusion might be accessible and a TEM-foil can be cut out of the diamond with the FIB device. That was my contribution to this work. No TEM foil – no TEM results – and no paper!

I’d like to accept this award also in the name of all the technicians, who run laboratories and very often they deliver excellent results for excellent papers, and all those who haven t so often a chance to be coauthor and get awarded for their work.

Thanks again to the MAC-Awards-Committee for the Hawley Medal and to all those who organized the wonderful lunch ceremony.”