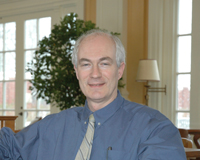 Rob Raeside is a graduate of Aberdeen (BSc 1976), Queen’s (MSc 1978), and Calgary (PhD 1982). He worked on ‘kimberlites’ in Montreal (although Roger Mitchell might object to the word kimberlite here!) and migmatites in British Columbia for his thesis studies.

He started teaching at Acadia in 1982, and has been there ever since, serving as head of geology since 1995. His research interests are primarily in metamorphic petrology and tectonics. When he started at Acadia, he planned to work on the petrology of Cape Breton metamorphic rocks. However, the first day in the field demonstrated that he had to map the area first – the undifferentiated schists and gneisses turned out to be diorites and tonalites. Thus began a 10-year period of mapping and investigating the structural geology and tectonics in the core of the Appalachian Orogen.

Through his graduate students, he has also maintained an interest in the low-pressure regional metamorphism and contact metamorphism of the highly aluminous rocks of the Meguma terrane in southern Nova Scotia.

Rob Raeside became editor of the short course volume series of the Mineralogical Association of Canada in 1999.