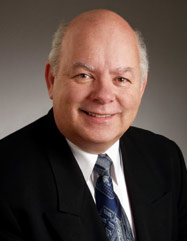 Bob Martin has served MAC for many years in his capacity as Editor of The Canadian Mineralogist; he is also the longest serving member of MAC council. Bob commenced his editorship in the late 70s as a co-editor and became sole editor in 1983. He has since that time raised the standard and profile of The Canadian Mineralogist to that of a major international journal. The journal is the best of the association journals, and it is of far superior quality to many periodicals published by the multinational publishing houses. The latter are riddled with editorial, grammar and spelling errors, and they have an inferior layout and style. The rise of The Canadian Mineralogist to its present status as the pre-eminent mineralogical journal is a direct result of Bob’s attention to detail, style and flair, as well as the unusual degree of attention he gives to every manuscript. No other editor reads, understands and annotates every paper submitted; Bob’s comments are always knowledgeable, constructive and helpful. This task takes an enormous amount of time.

Not content with editing The Canadian Mineralogist, Bob has shown tremendous initiative in instituting a series of Special Publications. These too have required enormous amounts of work in ensuring that they meet his high standards. In addition, and to his credit, Bob has also managed to maintain an active and significant research program in the Department of Earth and Planetary Sciences, McGill University.

MAC has benefitted immeasurably from Bob’s work; he is without doubt one of the most deserving candidates ever for the Berry Medal.

Thank you for your acknowledgement of my work on behalf of the Mineralogical Association of Canada. The award of the Berry Medal means a great deal to me. It is, after all, named after Leonard Gascoigne Berry (1914-1982), the founding editor of The Canadian Mineralogist, a journal with which I have become closely associated since volume 16 (we are now publishing volume 39)! That was roughly two thousand manuscripts ago, or taking a conservative average of twelve pages per article, twenty-four thousand printed pages ago, or taking an average of 2.5 double-spaced pages of authors’ copy to one page in the journal, sixty thousand pages of annotated and inspired prose. Over the years, the journal has evolved, and I want you to know that it still is evolving.

How did I get started? You might be interested to know that editors number two and three, John Jambor and Louis Cabri, both approached me one day, and proposed that I become editor number four. I remember meeting them in a pizza joint near the CANMET – GSC complex in Ottawa. They had somehow reached the conclusion that I needed this challenge, and had some aptitudes to make the grade without going mad or making people mad. Then I remember them coming to Montreal to cajole me further. I also remember being completely awed at the responsibility … How can I do this? How can I take someone’s best efforts and say that more could and should be done? Of course, the secret is to deal with people in an honest, straightforward, and firm way. I am still awed, but less at how to do it, and more at how often I must do it.

To John Jambor, being editor meant constantly being interrupted by things coming at you from left and right fields. Every day’s mail (and, lately, e-mail messages) bring surprises. The editor just cannot let things accumulate, because more will come tomorrow, and the next day. I will let you in on a secret. I am a born procrastinator. To invite a procrastinator to become editor of a main-line journal has the makings of a major disaster, or … the makings of a challenge to change, or else the career as editor is bound to be short-lived.

I learned the ropes by working closely with Louis Cabri for three years or so. Then I decided that I wanted to run the show. I found out recently that wanting to control is what I inherit from my mother’s side of the family. As an editor, I must constantly delegate, to a board of Associate Editors. But I also like to feel that I am ultimately in control. The buck does stop here, after all. Other editors have their fifteen or twenty associate editors deal directly with the authors. That approach does wonders to free the editor considerably, so that he can live a normal life-style instead of always walking around with two or three manuscripts in various stages of progress in his briefcase. The great drawback to that approach is completely predictable: there are fifteen or twenty different standards, and ways to deal with authors. At least in the admittedly very centralized Can. Mineral. system, every author deals with me, my standards, my aspirations for the journal. I am the one who writes those letters of acceptance and rejection. But I must write in such a way that the author walks away from his encounter with me with the impression that he or she was treated fairly, and may want to be a repeat customer some day.

I was really fortunate in spending those early formative years in the company of an editor’s editor, Joseph D.H. Donnay. He had come to McGill University as a “fellow by matrimony”, as he used to say. Gabrielle, his wife, joined the staff at McGill the same year I did, and Jos had retired from The Johns Hopkins University at age 65. So he willingly helped me in his post-retirement years, and in particular gave me richly rewarding feedback. He was so supportive of my efforts. Gai, on the other hand, was of the opinion that I needed my head examined to have taken on such a mandate.

Jos was a philologist par excellence. I remember him discussing with me the best way to faithfully translate the authors’ abstract into a sommaire that captured the essence of the findings being reported. Jos’s command of French and English surpassed mine, and there too I was forced to change, to raise my standards to a higher plane. Mostly, though, what I learned is encapsulated in this passage, reproduced from his “Code of Ethics in Scientific Work”, which I reproduced a long time ago in the journal: “Scientific research is a beautiful co-operative adventure, not a cut-throat business. Professions in which people help one another rate high in the community, in the Nation, and in the World.” I firmly believe that tenet of his code of ethics.

There is no doubt in my mind that my teaching and research activities have been incredibly enhanced by my stint as editor of a main-line journal. Areas of strength in the journal become my areas of strength by osmosis, because yes, I do read everything, and more than once too! I have learned so much about crystal chemistry, structural crystallography, petrology and ore-mineral assemblages! I sense that I teach about these things with confidence and a baggage of facts and insight that I otherwise would not have acquired under normal circumstances.

The person left to thank is my wonderful wife, Vicki Loschiavo, who tolerates all this nonsense. Not only does she tolerate it, but she even participates in it, as managing editor. Vicki is incredibly supportive in everything that I undertake on behalf of the Mineralogical Association of Canada, and richly deserves a good chunk of this medal. And yes, she has a day job too! So we both contribute our talents to make the publications of the MAC the best we can. We are keenly conscious of the fact that The Canadian Mineralogist, in a small but meaningful way, provides impressions about Canada on the world stage, and we do work very hard to make that image as positive as possible. Thank you again for associating me and my mate with Leonard Berry’s dream.”