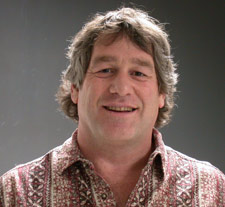 Bob Downs was born in 1955 in Brandon, Manitoba. He completed his B.Sc. in mathematics at the University of British-Columbia in 1986 after ten years as a conctruction worker. He built the Camble Street Bridge, Burrard and Granville Street subway stations in Vancouver, and the Dempster Highway in the Yukon, to name a few of his projects.

He worked as a professional mineral collector, drilling and blasting rocks. After stints as assistant curator of the UBC mineral museum under Joe Nagel and in the National Mineral Collection in Ottawa with Gary Ansell, Bob moved to Virgini aTech and obtained an M.Sc. in 1989 and a Ph.D. in 1992 in mineralogy under the joint directions of Jerry Gibbs and Monte Boisen (math). His graduate studies were focused mainly on the analysis of thermal motion in crystals. He then accepted a post-doctoral position at the Geophysical Lab in Washington D.C. to learn high-pressure crystallographic techniques with Bob Hazen, Larry Finger, and Charlie Prewitt.

In 1996 Bob took a faculty position at the University of Arizona. His research interests are currently focused on the high-pressure behavior of pyroxenes and the analysis of electron density and bonding in minerals. Bob will be promoted to associate professor this year. He is happily married to Dori and they have two boys, Gordie and Clay. They throw a fine party each year during the Tucson Gem and Mineral Show, with an open invitation to mineralogists and Canadians.

The Leonard G. Berry Medal is awarded for distinguished service to the Mineralogical Association of Canada. It is my honor and pleasure to introduce to you this year’s recipient, Robert Terrance Downs, another of Manitoba’s gifts to the mineralogical sciences. As you will learn, Robert Downs is indeed worthy of this honor, and I think that Leonard Berry himself would be most pleased with this year’s recipient, as he has provided services that are of particular relevance and importance to the mineralogical community at an international level.

Born in Brandon, Manitoba, Robert took the road less traveled to becoming a respected mineralogist. While pursuing an early career as a construction worker contributing to the growth of the Vancouver area skyline (Cambie Street Bridge, Burrar and Granville Street subway stations) and northern development (Dempster Highway in the Yukon), he obtained his first degree at the University of British Columbia (Mathematics, 1986). Following stints as assistant curator at the UBC mineral museum with Joe Nagel and in the National Mineral Collection in Ottawa with Gary Ansell, Bob moved to Virgina Tech and obtained his M.Sc. (1989) and Ph.D. (1992) degrees in the area of thermal motion in minerals. After a post-doctoral position at the Geophysical Lab in Washington, D.C., Bob moved on to his present faculty position at the University of Arizona, where he resides with his wife Dori and their young boys, Gordie and Clay.

Whereas the Mineralogical Association of Canada appreciates the efforts and contributions Bob has made to the construction of famous Canadian structures and numerous publications in the mineralogical sciences, this is not why he is being honored today with the Berry Medal. In order to appreciate his worthiness of this honor, allow me to read to you part of the nominating letter which will enlighten you as to the exemplary efforts of Robert Terrance Downs.

I am pleased to nominate Robert Downs … for the Leonard Berry medal to recognize his work behind the scenes to make The Canadian Mineralogist a superior journal. Bob approached me ten or so years ago, and offered his services in a novel way. He wished to volunteer his services as Technical Editor of all crystallographic papers accepted for publication in The Canadian Mineralogist. In view of his research interests, he was interested in compiling a data bank of reliable crystal-structure data. He had found that the reams of tables of atom coordinates, bond lengths and bond angles, as then published in both The Canadian Mineralogist and American Mineralogist, and other journals of course, contained many errors, clerical in nature in many cases, but not all … Bob developed the software to carry out these checks systematically, and offered, as I say, his services to editors of both journals … Bob has been diligently recalculating everything in both journals since then [and] it soon becomes apparent if there are internal inconsistencies … I would estimate that serious errors crop up in about two-thirds of the articles … I claim that in his behind-the-scenes assiduous work on reams of tables that I send his way, Bob contributes in a very meaningful way to the excellence of our journal. Nothing gets published in the area of crystallography until it gets the Downs Seal of Approval! It is in recognition of this consistent and unsung service that I am nominating Bob for the Leonard G. Berry Medal.

The councillors of the Mineralogical Association of Canada indeed also recognize the significance of Bob’s work over the past many years and its importance in contributing to the stature of the journal. In acknowledgment of these unsung volunteer efforts in favor of the association, it gives me great pleasure to present to you the Leonard G. Berry Medal for 2002. Thank you for your services and congratulations!

“I thank the Mineralogical Association of Canada for honoring me with the Berry Medal for significant contributions to the Association. Every person and their accomplishments are the net result of their experiences and opportunities, so I would like to tell my story and thank those involved.

I was born in the Shilo Army Camp near Brandon Manitoba, home of hookers and hockey players. My mom was a goalie. When my dad was discharged from the Army, he became a construction worker and we moved out to northern British Columbia, where he eventually became a Labour Union leader. We moved around a lot, and lived in some remote places, often eating moose or grizzly that my dad hunted. In one of these places, I met an old prospector who, if I visited him, would give me crystals from out of a bucket that he kept on his front porch. My parents divorced, and I moved with my mom and sisters to the welfare projects in Windsor, Ontario. In Windsor, I had the best mineral collection of any kid on the block, and this perhaps provided the inspiration to get me started in my life-long interest in minerals and mineral collecting.

I left home at the age of 14 and started hitchhiking and hopping trains in order to get back to British Columbia to see my dad. I ended up finishing my high school in Nanaimo, B.C., and enrolled at U.B.C. Although Geology was the carrot that I chased to become the first member of my family to ever go to college, I was not excited by my introductory course, and consequently I changed my major to mathematics. It was difficult to attend school every year because I would get these high- paying summer jobs in construction in the middle of nowhere, and I would stay till the job played out. I graduated with my degree at the age of 30. In between starting and ending university, I also kept up with my mineral collecting and even tried professional collecting for a while, learning how to drill and blast rock from Bob Jackson. During my last year as an undergraduate, I was fortunate to get a part time job with the late Joe Nagel, the curator of the U.B.C. mineral museum. Joe encouraged me to pursue a graduate degree and also helped me find a summer job with Gary Ansell at the Geological Survey of Canada, working on the national mineral collection.

Graduate school was in Blacksburg at Virginia Tech, where I studied with Jerry Gibbs and Monte Boisen. The mix of minerals and math provided by these two wonderful scientists provided the best education I could have hoped for. They perhaps got more than they bargained for, and had to spend a great deal of effort to polish my rough edges. I consider Monte and Jerry to be two of my best friends. My graduate research involved obtaining a large number of crystal-structure datasets from the literature. I started collecting these datasets and studying the information that could be obtained from them. I was surprised and appalled at how many errors the published tables contained and how carelessly prepared the manuscripts must have been. My best friend in grad school and best man at my wedding was Kurt Bartelmehs. In 1988, he and I decided to write some computer graphics programs to visualize the crystal-structure data in order to help us in our research and to help teach mineralogy labs. Together, we collected a large number of datasets and created some significant software for analyzing and visualizing the data.

I had the opportunity to do both a pre-doc and a post-doc at the Geophysical Lab with Bob Hazen, Larry Finger, Charlie Prewitt and Hexiong Yang. Bob is a good friend and has provided me with practical, sound advice that includes “Always keep the diffractometer running!” and “Never shut your office door when a female student is inside”. Larry taught me not to let the instruments limit my ideas, and Charlie is the wise sage who knows everything. Yang is a best friend; we completed post-docs together and really enjoyed working together.

While I was at my post-doc, I went to the NATO feldspar meeting in Edinburgh and had the chance to sit next to Bob Martin, editor of The Canadian Mineralogist, while on a bus tour. If I recollect the events correctly, we got to talking about crystal-structure datasets and I told him about the problems with data in the literature and he asked me if I would check some of the data about to be published in his journal. The very first dataset that he gave me had absolutely nothing to do with the contents of the paper with which it was being published! It was amazing to both of us that we would see this happen in the proof stage of a paper and further emphasized my concern about the quality of published crystal-structure data. Soon I was given the title of Technical Editor (Structures) of The Canadian Mineralogist, and I now examine each dataset prior to publication. Bob Martin is a consummate editor who is always looking for ways to improve his journal and thus improve the quality of scientific communication. In contrast, it was the position of the editors of the American Mineralogist that the quality of data was the sole responsibility of the authors and not the journal. This position changed once Rich Reeder was editor, and then I began to check the crystal-structure data for American Mineralogist as well.

Given that I was now collecting data that had been carefully checked, I decided to make these datasets available to the general public. I was then an assistant professor at the University of Arizona, and needed to come up with funding opportunities. Fortunately for me, the National Science Foundation began a program to financially support Information Technology, and I have been awarded funding to build and maintain a mineralogical crystal-structure database on the Internet. It will be accessible through the web pages of the Mineralogical Association of Canada and the Mineralogical Society of America and will contain the checked crystal-structure data for every structure published in American Mineralogist and The Canadian Mineralogist. Now with the Berry Medal pinned on my chest and grant money burning a hole in my pocket, Arizona is promoting me to associate professor this summer.

Finally, I would like to acknowledge the support of my family. I met my wonderful wife, Dori, during graduate school. We fell in love while playing volleyball, and she has been a source of encouragement and inspiration since then. When I failed my prelims, she wanted to burn her diploma. Together, we have created a happy family with two very fun boys, Gordie and Clay. I thank them for their love.”