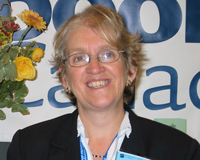 Pierrette Tremblay graduated from Université Laval, Québec, with a BScA in geology in 1971. For her MSc thesis at Queen’s University, she studied the mineralogy and geochemistry of radioactive pegmatites.

After working for the Ministère des Ressources Naturelles du Québec from 1975 to 1979 as scientific editor and metallogenist, she did some freelance work while her three children David, Lisa, and Thomas were small.

In the 1990s, she worked on several outreach projects for the Institut National de la Recherche Scientifique (INRS), Québec, for which she was awarded the Ward Neale Medal of the Geological Association of Canada in 1999.

Pierrette started volunteering for the Mineralogical Association of Canada in 1994. She edited the MAC Newsletter from 1999 until 2004, and for the last three years, she has acted as Executive Coordinator for the Association. She is currently managing editor of Elements ? An International Magazine of Mineralogy, Geochemistry, and Petrology.