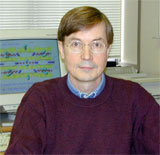 Mati Raudsepp graduated from McMaster University in 1971 with a B.Sc. in geology; his thesis was supervised by Denis Shaw (The Distribution of Rb in Certain Iron Formations). After working for two years at the Ontario Department of Mines he moved west to the University of Manitoba and completed an M.Sc. in geology with Lorne Ayres (Petrology and Emplacement of a Differentiated Subvolcanic Mafic Sill Complex in the Early Precambrian Favourable Lake Volcanic Complex). Also during this period he survived summers with the Geological Survey of Canada in the barren lands and on the Labrador coast.

Having had his fill of blood-sucking insects, he went on to do a Ph.D. with Alan Turnock and Frank Hawthorne (Evaluation of Amphibole Synthesis and Product Characterization), also in Winnipeg. During the latter project, he became interested in the detailed characterization of minerals and acquired expertise in X-ray powder diffraction, electron-probe microanalysis, infrared spectrometry, crystallography and a host of other techniques useful for this purpose.

After completing the Ph.D. he stayed on in Winnipeg as a postdoctoral fellow, research associate and sessional faculty member and was involved in diverse projects: mineralogy of the Fox River Sill, characterization of synthetic amphiboles, pyroxenes, spinel and Y-Ba-Cu-O superconductors. In 1992 he moved west again to the Department of Earth & Ocean Sciences at the University of British Columbia where he is a Professor (Hon.) and the Director of the Electron-microbeam/X-ray Diffraction Facility.

In Vancouver, he continues to work on various aspects of the detailed characterization of minerals and related projects such as the quantitative phase analysis of mine tailings and wastes using the Rietveld method and electron microbeam techniques.