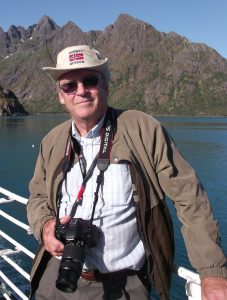 Mr. Back received his BSc in 1985 from the University of Toronto and his MSc in 1990 (‘A study of tellurite minerals: Their physical and chemical data compatibility, and structural crystallography) for the same institute.  He began is mineralogical career as a Research Assistant in the Department of Mineralogy at the Royal Ontario Museum in 1985, with a focus on X-ray diffraction, retiring from this position in 2011.  He worked under the tutelage of Joe Mandarino, Fred Wicks and Robert Gait at the ROM, developing insights, along with the knowledge and skills, that were collectively essential to him becoming the world-class mineralogist he is today.  Mr. Back has had a life-long interest in tellurium oxysalt minerals and in recognition of his contributions to mineralogy and specifically, tellurium oxysalts, the new species backite, Pb2Al(TeO6)Cl, from the Grand Central mine (Tombstone Hills, Arizona) was named in his honor.

Mr. Back is a volunteer par excellence, offering his time freely and without reservation to many amateur associations (serving several times as President of the Walker Mineralogical Club, providing mineral identifications at the Bancroft Gemboree, to name just a few).  Mr. Back has been maintaining, and continuing to ensure the publication of, Fleischer’s Glossary of Mineral Species.  This small, relatively non-descript volume, is an indispensable resource for active mineralogists working on new or rare minerals, as well as those seeking to appreciate how diverse the world of mineralogy is.  He began his work on the Glossary in 2004, with the late, great, Joe Mandarino as senior author.  After Joe’s far-too-soon passing in 2007, Mr. Back immediately assumed the role of senior author, a task which he continues to this day.  He also continues to work on the unpublished Encyclopedia of Minerals that Joe Mandarino had initiated, and it is hoped that one day, this too will be brought to light.