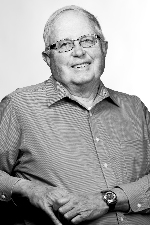 Jim Nicholls graduated from Texas Christian University in Fort Worth (Texas, USA) in 1964 with a BSc in geology. He received his PhD from the University of California, Berkeley (USA), in 1969. That same year he joined the Department of Geoscience at the University of Calgary, where he worked for 35 years.

He served as councillor and later as vice-president, president, and past president of the MAC. He studies magmatic processes from rock, mineral, and melt (glass) compositions through thermodynamic and chemical modeling. He is currently working on projects involving Pearce element ratios and quantitative optical mineralogy.

Prof. Nichols served on MAC Council from 1998-2002 in the capacities of Vice-President, President and Past-President. This was a period of trepidation for our Association as it coincided with the formal induction of the MAC Foundation and the transfer of significant funds from the MAC required for the scholarships and travel grant that it provides. Jim was also an active member of the fundraising committee during his time on Council and this was an important step in securing the funds necessary to support the endeavors of MACF.

Throughout his many years of service, Jim managed to keep Council on a focused path. He has always had a quiet disposition but speaks with clarity and conviction and his words have been instrumental in cajoling a number of folks into joining council without even knowing it (myself included!).

I had the pleasure to interact with Jim in 2012 as we collaborated in running a very successful Berry Summer School in Optical Mineralogy which was sponsored by the MAC. Truth be told, this was always his ‘baby’ and without his dedication, it is quite likely that it would not have occurred. In the end, approximately 20 graduate students were given the opportunity to rehone their skills in optical mineralogy over several days and the MAC was able to once again demonstrate its commitment to the mineral sciences in Canada.

Although Jim is retired, he continues to remain active within the geological and mineralogical communities through development of e-texts on Volcanic Petrology and Optical Mineralogy. He has always demonstrated tremendous support for the MAC and would make for a fine recipient of the Berry Medal.

“Thank you MAC for awarding me this medal. When I opened Lee Groat’s email I could hardly believe it. It never crossed my mind that my efforts were worthy of an award. I am honored and grateful for your recognition.

The Association is a fascinating, fun, and sometimes, but rarely, frustrating organization. It’s strength has always been the promotion of Mineral Science through education. Over the years, the Association has delivered Short Courses ‘close to fifty sets of short course notes now exist’, it has printed books, it has published the Canadian Mineralogist with its thematic issues, it has funded and awarded scholarships through the MAC Foundation, it has presented best student awards through universities, it has sponsored international meetings such as IMA conferences, it has collaborated with other geoscience organizations, notably GAC but also MSA and likely others I don’t know about, it has created posters and post cards, and it has developed and taught Berry Schools where students can find expert, in-depth instruction on a particular topic. An amazing range of activities, activities for which the Association can take pride.

I first connected with MAC 39 years ago, in 1977 when I had a small part in the 2nd ever MAC Short Course. It was organized by Hugh Greenwood for the annual GAC/MAC meeting in Vancouver. And its title: Application of Thermodynamics to Petrology and Ore Deposits, 1977 was in the early years of the heyday of Mineral Science. University programs were loaded with courses in crystallography, mineralogy, optical mineralogy, x-ray mineralogy, geochemistry, applied geochemistry, ore deposits, introductory and advanced igneous, metamorphic, sedimentary petrology, and, in some departments, gemmology. Not all these were required courses but they were offered and they were taught, sometimes to less than a handful of students. And they were taught at the undergraduate level. In the last two or three decades, the number of undergraduate courses in Mineral Science has decreased; it’s decreased here in Canada, across North America, and around the World. The number of courses in a typical geoscience curriculum has changed from four, six, even eight or more to, in some departments, only one.

The place of prominence once enjoyed by Mineral Science in Geoscience curricula will likely never return. In this new world, students conduct research, work on projects, work on teams, and, most important, they learn by doing. And that, I think, is a good thing. But, and there’s always a but, another mode of learning is needed to turn students into professionals, and that mode is becoming proficient through practice. To be effective, practice must be guided by coaches, mentors, and instructors and take place within a community of practitioners and learners. In a community, students can get the necessary feedback. The practice fields where students became Mineral Scientists were the labs integrated with Mineral Science courses. Many of these practice fields disappeared when the courses disappeared. In addition, at the Universities where I’ve had a connection, students often organized discussion groups to review topics in the Mineral Sciences. Discussion groups still exist but it seems to me those with a focus on Mineral Science are nearly, if not entirely, extinct.

How, then, can these changes be converted into opportunities? Writers provide a particularly illuminating example. In cities across the land, writing groups have sprung up where writers at all levels read their works, critique each other, and practice by writing to a prompt. To supplement these activities, dozens of books, which delve into specific topics connected with writing, have been published. Topics range from how to get published to how to write a sentence.

I encourage the Association to continue and expand its educational program by looking to fill the gap left by changing academic programs To be sure, doing such would be a challenge. But the Association can do it if you, the people who are the Association, so choose. It would be fun, I think, to watch, fascinating to learn what can be accomplished and, with luck, may it happen with nary a frustration. Again, thank you MAC for honoring me with the Berry Medal. I appreciate it more than I can say.