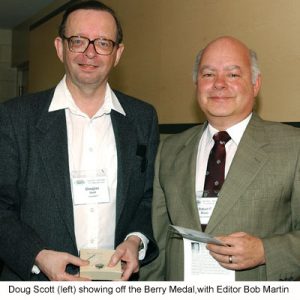 Doug Scott began his career in sulfide mineralogy with Digger Gorman at the University of Toronto, switched to sulfide synthesis and crystallography under F.G. Smith and Les Nuffield, went on to a doctorate in sulfide crystallography at Queen’s University under Len Berry, and finished with a post-doc at Bern, Switzerland under Werner Nowacki. This was followed by a twenty-year career in industrial process mineralogy, much of it as Senior Staff Scientist for Falconbridge.

Doug became involved with The Canadian Mineralogist index in the mid-1980s. He reports that in those days it was hand written on individual file cards, which he sorted and then had typed at the Geological Survey with the assistance of John Jambor. Now it is all done by computer and e-mail, but you still have the same person to blame for any errors.

Doug Scott began his career in sulfide mineralogy with Digger Gorman at the University of Toronto, switched to sulfide synthesis and crystallography under F.G. Smith and Les Nuffield, went on to a doctorate in sulfide crystallography at Queen?s University under Len Berry, and finished with a post-doc at Bern, Switzerland under Werner Nowacki. These studies were followed by a twenty-year career in industrial process mineralogy, much of it as Senior Staff Scientist for Falconbridge.

Doug became involved with The Canadian Mineralogist index with volume 18, in 1980. He reports that, in those days, the index was hand written on individual file cards, which he sorted and then had typed at the Geological Survey with the assistance of John Jambor. Issue after issue, Doug goes through each and every article to pull out entries for the Author and Subject indexes. He is incredibly thorough and must work efficiently so that the annual index does not slow down the production of the December issue.

“Thank you for the award of the Leonard G. Berry medal, it was an unexpected honour for doing something that I actually enjoy and which keeps me scientifically current. It does however mean a great deal to me since Len Berry was both a mentor and a good friend. I should probably say a few words on how that situation came about. Most of you will not know my history in any detail, although many of you probably know of me as the long-time author of the annual index. It was also requested that I say something of an unusual incident that happened regarding Len and my time with him.

It was also through Digger’s recommendation that I was able to undertake a rather unusual joint Masters program in sulfide synthesis with F.G. Smith and their x-ray diffraction with E.W. Nuffield. This also relates to Len because the sulfide that I chose to grow and study was lillianite which had been legitimately discredited by Len in 1940 but whose composition was reinstated by me in 1966. All three of my professors of course knew Len Berry at Queen’s very well and strongly recommended that I go to him for a Doctorate in sulfide crystallography – so I did.

I was accompanied on this move to Queen’s by my friend and fellow sulfosalt enthusiast Paul Kingston, who was also to study with Len. At that time, graduate student carrels in Miller Hall were at a premium and very cramped. There was, however, a large and moderately junk-filled basement space immediately adjacent to the x-ray laboratory. With Len’s active assistance, he thought it was a great joke and showed ingenuity so he made sure that no one threw us out when they eventually noticed what we had done, Paul and I partitioned off one corner of the basement and built ourselves a fine joint office. It turned out to be a very lucky thing that we did. The third year that we were there Len went on sabbatical and while he was away the Department chairman (who shall remain nameless) decided to clean out the x-ray laboratory to make room for some new equipment. One thing which he classified as junk was a large wooden cabinet with many shallow drawers; it contained all of the powder mounts listed in the Peacock Atlas, most of the original films and some of the type specimens. Paul and I became aware of what was happening just as the garbage men were loading the case onto a truck. We dashed out the back door and ran down the alley after the truck screaming STOP at the top of our voices. Luckily the driver listened to us and returned the case; it was still there in the front left-hand corner of the laboratory when I visited Queen’s in 1988 and I hope that it remains there to this day. Len needles to say was both ecstatic and furious when he returned and we told him what had almost happened.

I became responsible for the Canadian Mineralogist index in the early 1980’s, and was peripherally involved with it for several years before that. In those days every entry was written by hand on file cards, the years worth of cards were manually sorted and sent to the GSC where they were typed out as a list which was sent to the printer. Today it is all done by computer and e-mail but it remains a finicky and exacting task and means that I have to read every paper very thoroughly. I have been accorded remarkable freedom to structure the index as I see fit so any complaints are directly my responsibility; do not blame Bob Martin for this one. In fact the only directive that I can remember receiving was a plea early on to please see what could be done about reducing the length of the index. That was when the listing of every locality mentioned was dropped and replaced by listing only those which are scientifically important on a global scale.

Len was the editor of Contributions to Canadian Mineralogy from 1950 to 1957 when he helped it to evolve into the Canadian Mineralogist and he remained its editor from 1957 to 1975. He also founded the Queen’s periodical exchange, which gave Canadian mineralogists a world-wide readership for their journal. He once told me, at a particularly hectic time editorially, that his objective was to provide a journal that was not only one that everybody needed to read but also was one that everybody wanted to read. He was constantly working to increase the relevance of the journal and I think that he would be very pleased with the journal that we have today.”