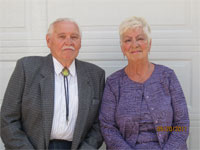 The Berry Medal 2011 is awarded to Bob and Fran Pinard in recognition of their pivotal role from 1990 to 2006 in moving the Mineralogical Association of Canada from an essentially volunteer-based organization to its current status as a professional, member-focused Canadian publishing house and a contributing member of the international Elements consortium of societies.

Bob Pinard spent his career at the Mines Branch in Ottawa and became involved in the Association in 1957, when it was a fledgling organization housed at the Mines Branch. After several years at the Royal Ontario Museum, the MAC office was moved to Ottawa in 1990, and Fran Pinard became manager of an office with an inventory of only 22 titles, no computer, no printer, no database, and no operational instructions. Over the years, MAC affairs took over the Pinard’s basement, and the family room was converted into a spacious office.

This award expresses more than MAC’s appreciation for the Pinard’s full-time operation of the Association’s business. It is also deserved praise for their dedicated service to the ordinary and institutional members of MAC. Bob and Fran brought members’ voices to Council debate through their annual reports on subscriptions and the business affairs of the Association. Thus, they challenged the decisions and whims of Council-thankfully often visionary and strategic but at times insensitive to practical, operational matters by focusing on service to members and growing the membership at affordable rates. They provided us with our flagship journal on time and met our demands for reprints, back orders, lost volumes, special and thematic publications, books, posters, cards, and anything else we needed from MAC. Fran and Bob, the membership thanks you heartily for this service to us and our Association.