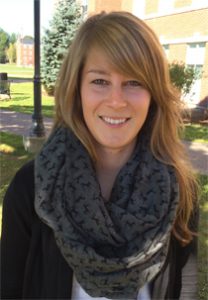 Nicolle Dupuis completed her BSc (Honours) in Earth Sciences at St. Francis Xavier University in 2013. Her undergraduate research focused on late Paleozoic post-collisional mafic magmatism and mantle evolution in the Pulo do Lobo Zone of SW Iberia and laid the foundations for her MSc research.

Under the supervision of Dr. Brendan Murphy and Dr. James Braid at St. Francis Xavier University, Nicolle is studying the evolution of the mantle beneath SW England over the course of the Variscan orogeny, which was a major event in the amalgamation of Pangea. Using 40Ar-39Ar geochronology, Sr-Nd isotopes and trace and rare earth element abundances, her MSc research examines the geochemical and isotopic signatures and emplacement history of pre-collisional intra-plate rift basalts and post-collisional lamprophyres in order to constrain their respective mantle source.

Nicolle’s work also seeks to explain the petrogenesis of lamprophyres in SW England and better understand the enigmatic relationship between the lamprophyres and voluminous granites of the Cornubian Batholith. Understanding the tectonic history of these rocks may shed light on the relationship between post-collisional magmatism in SW England and elsewhere in the Variscan orogen, namely the Iberian and Bohemian Massifs. Ultimately, Nicolle’s research will contribute to a better understanding of magmatism and mantle behaviour in the lower plate during the waning stages of continental collision.