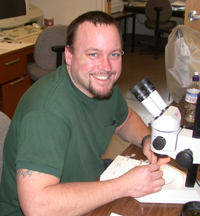 Jason McKenzie comes from southwest Nova Scotia, and his interest in geology began when he became the inaugural president of the James Hutton Geology Club at age 14. Jason completed his BSc (geology) at Acadia University in 1996. Later that year, he started working on his MSc thesis with Dr. Dante Canil at the University of Victoria, where he studied kimberlite-hosted mantle xenoliths from the Slave Province. Jason worked in diamond exploration in the Canadian Arctic and Finland from 1997 to 2001. Seeking a new challenge, he has since been working on developing a crystal growth process with Redlen Technologies in Victoria, BC. Experimenting with semiconductor crystal growth prompted him to pursue a PhD in experimental petrology.

Jason’s research seeks to answer questions regarding how, and at what rate, volatile elements (especially rhenium) are released from a magma during ascent and emplacement. This work will help constrain the contribution of Re volatility to estimates of Re flux from the mantle to the crust. Jason conducts experiments to quantify Re volatility/mobility in silicate liquids and establish the roles of melt composition, temperature, ƒO2, and speciation on degassing behavior.

Jason’s research also aims to establish a robust experimental and analytical procedure that captures the behavior of Re and several important heavy metals (Hg, Pb, As, Se). Volcanic emission of Re and other heavy metals may contribute a significant load to the hydro/atmosphere. For example, it has been suggested that volcanic emissions of the volatile element Hg may represent as much as 40% of natural emissions of Hg to the atmosphere. A quantitative understanding of rates and processes related to volatile release of heavy metals will provide important constraints on the geochemical behavior of these elements and their flux across geochemical reservoirs.