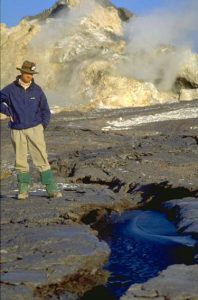 Andrew J. Locock, a PhD student at University of Notre-Dame, under the supervision of Peter Burns, is this year’s recipient of the $10.000 MAC Foundation scholarship. We asked him to introduce himself.

I am a native of Edmonton, and obtained my B.Sc. with Honours in Geology from the University of Alberta. During the summers of my undergraduate studies, I worked in British Columbia, Saskatchewan and the Northwest Territories for gold exploration companies. I continued my studies at the University of Alberta and obtained a M.Sc. in Geology under the direction of Dr. D.G.W. Smith, Dr. H. Baadsgaard and Dr. R. St. J. Lambert. During this time, I worked as a part-time assistant to the Curator of Geology at the Provincial Museum of Alberta, Mr. R. Mussieux, and helped in the design and creation of the current Mineralogy and Geology galleries and the preceding Treasures exhibit. After completing my studies, I worked in South America as a diamond-exploration mineralogist and subsequently in Nunavut and the Northwest Territories on advanced gold and diamond projects, respectively.

In 2000, I began my Ph.D. at the University of Notre Dame under the guidance of Dr. P.C. Burns. My research project is a multi-faceted investigation into the crystal structures and crystal chemistry of selected actinide-bearing minerals and analogous synthetic compounds. The study of uranium crystal chemistry has taken on renewed importance with the proposal for geologic disposal of spent nuclear fuel that consists mainly of uranium dioxide. Under the long-term storage (damp oxidizing) conditions of the proposed repository at Yucca Mountain, spent fuel will corrode and produce many corrosion products that are identical with known uranyl minerals. Of particular concern is the behavior of the long-lived fission products and trans-uranium actinides during and after oxidation.

My objectives in this research project are:

I have started my thesis project by examining uranyl phosphate and arsenate minerals and compounds using a combination of synthesis and single crystal X-ray diffraction techniques. The uranyl phosphates are widespread minerals that are relatively insoluble and may limit the concentration of uranium in many groundwaters. These mineral groups (including phosphuranylite, phurcalite, autunite, meta-autunite) remain poorly characterized, and it is likely that several new species may be identified by the study of natural specimens. This work is intended to increase our knowledge of uranium crystal chemistry, and ultimately to aid in understanding the relationships between the structures and occurrences of uranyl minerals.

Dr. R.H. Mitchell’s article on Oldoinyo Lengai in the December 2000 issue of the Newsletter inspired me to participate in a 2001 expedition to this volcano. Although unconnected to my current research, this was a “chance-of-a-lifetime” trip, and the volcano rewarded us with an exceptional amount of eruptive activity. In this photograph, I am standing beside, or perhaps even too close, to an active natrocarbonatite lava channel.